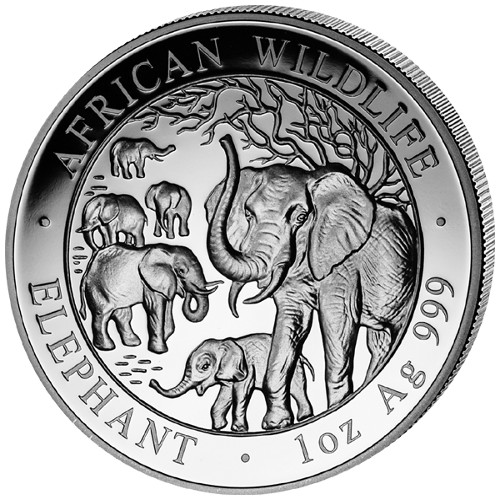 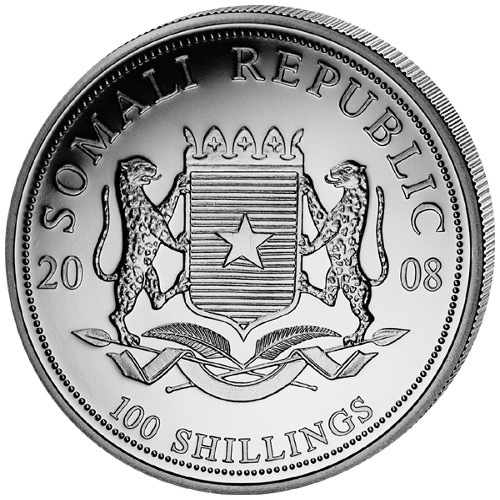 The 2008 1 oz Somalia Silver Elephant coin is struck with .999 fine silver, and ships in brand new, brilliant uncirculated condition. We have these coins in stock and ready to ship immediately, with quantities of 20 coming in mint-sealed tubes. As a key date from the African Wildlife Series, the 2008 Somalia Silver Elephant Coin is one of the most popular minting years.

The African elephant has stood on the brink of extinction for almost a century now. Adult elephants have massive ivory tusks that have been sought by hunters, collectors, and designers around the globe. The African Wildlife Series calls attention to the plight of the elephant on the annual Somalia Silver Elephant coin. These coins were first introduced in 2004 and have quickly risen to popularity by collectors of foreign silver coins

African elephants were the target of hunters and poachers from the moment ivory was introduced to the Western world. It was highly prized for its use in a variety of applications, and the desire to own ivory products resulted in the near extinction of the animal. Separated into two sub-species, bush elephants are the largest land creatures in the world, while the forest elephant is the third largest terrestrial creature.

The obverse side of the coin bears the coat of arms of the Somali Republic. In the middle of the heraldic shield is a single star, with leopards on either side of the shield to support it. An engraving that reads Somali Republic is located above the image. The Bavarian State Mint struck the first coins in this series in 1999 for the African nation of Zambia, making this coin the 10th to be released from the series.

If you have questions about the Somalia Silver Elephant coin or the online purchasing process, feel free to contact a JM Bullion associate at 800-276-6508. We are also available over the web courtesy of our live web chat and email services.