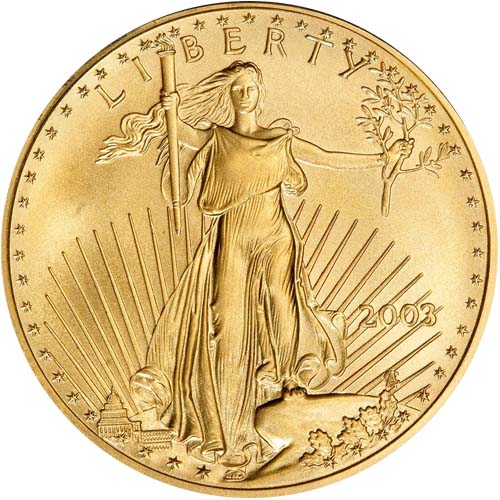 American Gold Eagle coins serve as the official gold bullion coin of the United States. Introduced in 1986, these coins are available in bullion, proof, and burnished versions with four total weights available that include 1 oz, 1/2 oz, 1/4 oz, and 1/10 oz options. Right now, the 2003 1 oz American Gold Eagle Coin is available to purchase from JM Bullion.

Each 2003 1 oz American Gold Eagle Coin in this listing is available in BU condition. Coins in this condition exhibit no signs of wear and tear, though you may notice minor flaws ranging from breaks in the luster and spotted surfaces to contact marks from the coining process.

With a mintage of 416,032 coins in the 2003 1 oz American Gold Eagle coin release, the popular bullion coins had increased in mintage and demand for a second consecutive year as it rebounded from its lowest mintage year ever in 2001. The 2003 release also saw the continuance of a trend in which the 1/10 oz coin proved more popular than the other weights.

On the obverse of the 2003 1 oz American Gold Eagle coin you’ll find the image of Lady Liberty from Augustus Saint-Gaudens. This image was created in 1907 by Saint-Gaudens as the first image in a series of new coin designs from the United States Mint that would revitalize American coin design.

The reverse of the American Gold Eagle coin includes the design of a family of nesting bald eagles. Created in 1986 for the Gold Eagle coins by Miley Busiek, the image includes a nest with bald eagle hatchlings and a female standing guard, while a male is depicted flying overhead.

All American Gold Eagle coins are produced by the United States Mint. Modern versions of the coin are all struck at the West Point Mint facility.

If you have any questions, please don’t hesitate to reach out to JM Bullion. Our customer service team is available at 800-276-6508, online through our live web chat, and via our email address.