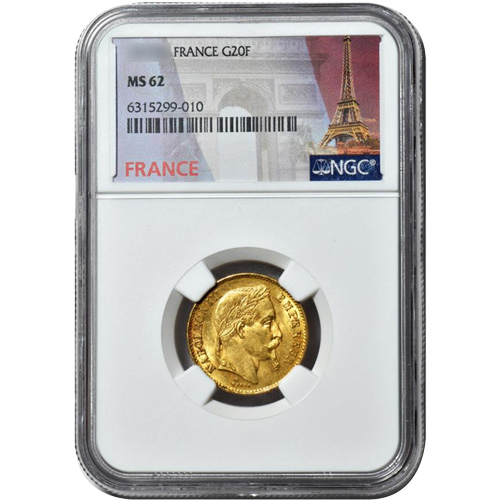 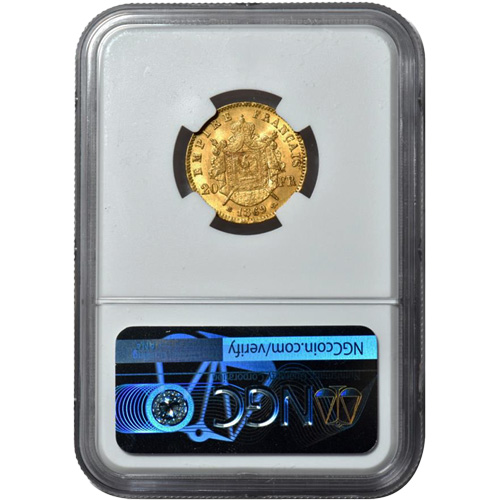 One of the most widely circulated gold coins in 19th and early-20th century Europe, the 20 Francs Gold Coin helped form the foundations of the Latin Monetary Union, a currency collective that is widely regarded as the precursor to the modern Euro currency. One of the many designs to grace the 20 Franc denomination was that of Napoleon III, the one-time President of the 2nd French Republic and the Emperor of the 2nd French Empire. Today, 20 Francs France Gold Coins in MS60-plus condition are available to you online from JM Bullion.

The 20 Francs Gold Coin was first released during the reign of Napoleon Bonaparte. By the time his nephew, Napoleon III, was elected the first President of France during the 2nd French Republic, the coin was a mainstay in circulation in France and beyond. During Napoleon’s time as President of the 2nd Republic and Emperor of the 2nd French Empire, three design versions were featured on the coins. The coins available in this listing represent the third and final version during Napoleon III’s reign.

All of these 20 Francs France Gold Coins are available to you inside plastic slabs with certification from the NGC. The coins available here range from Mint State 60 to Mint State 62. None of the coins show any wear patterns from circulation and retain impressive visuals with lustrous appeal and sharp details.

Please note that JM Bullion offers these coins with the possibility of dates between 1861 and 1869, as well as NGC grades from Mint State 60 to Mint State 62. We are not able to guarantee a date mark or specific grade in advance. All items are chosen for you after your payment clears. If you buy multiples, please be aware you could get all matching items.

On the obverse of 20 Francs France Gold Coins is the final bust of Napoleon III to feature in the 20 Francs Series during his reign. This third version of Napoleon III’s effigy added a laurel wreath around his head and comes with inscriptions of his name and title.

The reverse side of the 20 Francs France Gold Coins available here has the ornate French coat of arms. The crowned shield has an eagle at the center and the field includes the nation of issue, face value, and date mark. All coins issued from 1861 to 1869 have these same two designs, with both designs created by Jean Jacques Barre.