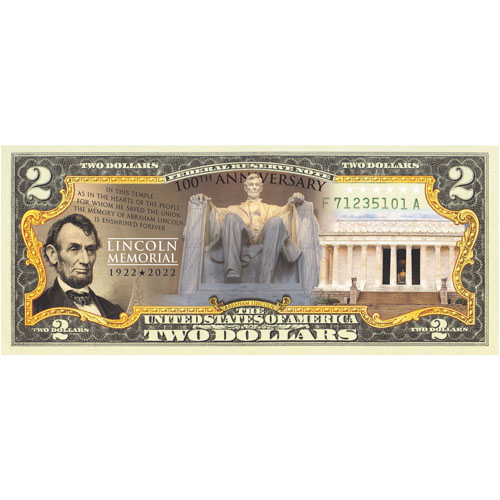 The Lincoln Memorial is one of the finest monuments not just in in America, but in the entire world. Inspired by Greek architecture, the memorial consists of a columned building that houses a magnificent statue of Abraham Lincoln. The structure was officially dedicated in 1922 and now celebrates its 100th anniversary. Right now, $2 Lincoln Memorial 100th Anniversary Legal Tender Notes are available to purchase online from JM Bullion.

All $2 Lincoln Memorial 100th Anniversary Notes in this online JM Bullion listing include a folio display case and a Certificate of Authenticity from The Merrick Mint. Each note is authentic Legal Tender taken from untouched packs of $2 bills from the Federal Reserve. The notes have undergone a proprietary colorization process to include Lincoln Memorial imagery over the obverse of the original $2 bill design.

On the obverse of $2 Lincoln Memorial Legal Tender Notes is a depiction of the Lincoln Memorial statue in the center, replacing the Jefferson portrait typically found there. To its left is a portrait of Lincoln, and to the right is the exterior of the Memorial modeled after the Parthenon. Notations include Lincoln Memorial 1922-2022, 100th Anniversary.

The reverse side of the $2 Lincoln Memorial Note features a recreation of John Trumbull’s Declaration of Independence painting from 1818. This famous image includes Thomas Jefferson at the center as he presents the declaration to Congress president John Hancock. The event depicted took place on June 28th, 1776. The declaration was then officially signed on July 4th, 1776. This image has been in use on the $2 bill since 1976.

Few presidents achieved so much during so little time as Abraham Lincoln. Though he only served for one term before his assassination, he guided America through its only Civil War, preserved the union, and ended slavery. The Lincoln Memorial does perfect justice to the 16th president of the United States. Modeled after the Parthenon in Greece, this historic monument includes a pillared structure and a nearly 20-foot-tall statue of Lincoln inside. Today it is a prominent tourist destination for travelers across the globe.

If you have questions, we’re happy to help. JM Bullion customer service is available to assist you at 800-276-6508, online through our live chat, and using our email address.