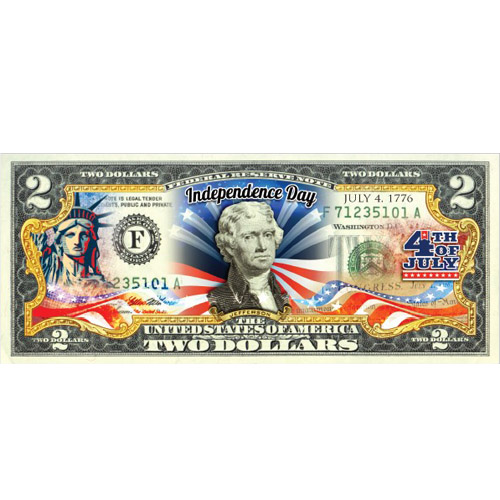 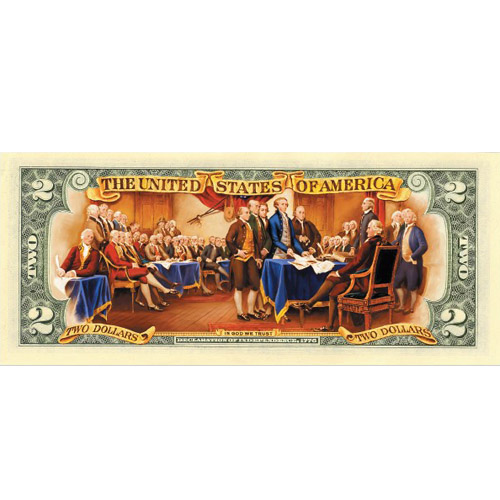 The most important federal holiday on the calendar each year in the United States is the 4th of July. Americas Independence Day, July 4th each year marks another year of freedom and self-determination for Americans. It commemorates July 4, 1776, the day on which the Founding Fathers signed their own death warrants by attaching their names to the Declaration of Independence. You can now own a modern $2 bill with colorized, commemorative designs celebrating the date. Today, $2 Colorized Fourth of July Legal Tender Notes are available to you online from JM Bullion.

The Fourth of July is not only important as an annual celebration of America declaring its independence from King George III of England and the United Kingdom, it is also important as the oldest holiday celebrated in America. Though it was first made an official federal holiday for government employees in 1870, American towns, cities, and early states began celebrating the 4th of July almost immediately. For example, in 1777, one year after independence was declared, the people of Bristol, Rhode Island, fired 13 gunshots in the morning and again at night on July 4th to mark the occasion.

All of these $2 Colorized Fourth of July Legal Tender Notes are available from Federal Reserve packs of crisp, clean, uncirculated $2 notes. These notes have been enhanced by the Merrick Mint using the latest colorization technology to deliver bold, brilliant imagery to the common surface areas of the US $2 bill. Each bill is housed in protective acrylic and comes with a presentation package that includes a Certificate of Authenticity.

On the obverse side of $2 Colorized Fourth of July Legal Tender Notes is the standard portrait of President Thomas Jefferson in the center. A signatory of the Declaration of Independence, President Jefferson was the third man to hold the office of President of the United States of America. His portrait is accompanied by beautiful, colorized visuals added to the bill to enhance its collectible value. The Statue of Liberty flanks him to the left as red, white, and blue dominates the rest of the field.

The reverse face of $2 Colorized Fourth of July Legal Tender Notes comes with a scene depicting the signing of the Declaration of Independence. A fitting note to be enhanced with 4th of July themes, the $2 bill has featured a replica of John Trumbulls oil painting depicting this moment since it was introduced in the Federal Reserve Note Series in 1976.

Please feel free to contact JM Bullion if you have any questions. Our customer service team is available at 800-276-6508, online using our live chat, and via our email address.

Ryan from - December 03, 2021
"The artwork is amazing. A centerpiece for any office desk or space without the high value risk of loss. You will show this to everyone who visits."