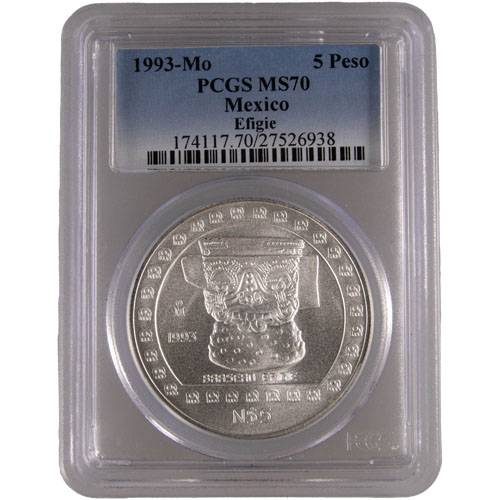 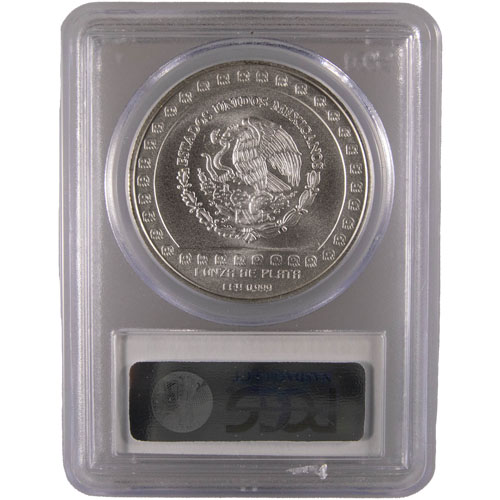 Three 1 oz silver coins were minted by Mexico to honor different Aztec gods in 1993. They were minted in various numbers, and the 1993 1 oz 5 Pesos Mexican Silver Brasero Efigie Coin had the lowest bullion mintage figures of all three of the coins, making it especially difficult to find.

This coin receives an MS70 grade from PCGS, making it a flawless Mint State specimen. It arrives in a protective plastic slab and with the appropriate labels.

The obverse design on the 1993 1 oz 5 Peso Mexican Silver Brasero Efigie Coin includes an image of the Mexican national coat of arms. In it, a golden eagle perches on a prickly pear cactus. The eagle is depicted as eating a rattlesnake, an important nod to historical legends of the Aztecs. Their legend said that they would know what location to build their city because they would see an eagle eating a snake.

The reverse design on this coin shows a totem-like image known as the Brasero Efigie, or Brazier Effigy. It is a representation of Tlaloc, the Aztec god of creation and rain. Tears are shown on the cheeks of Tlaloc, and those are symbolic because Aztec legend says that Tlaloc’s tears were what regenerated and fertilized crops every year. Images on both sides of the coin are surrounded by a D-shaped border made up of what looks like hands and are, in fact, the Aztec symbol for hands.

The Mexican peso has a long and complex history. Starting in the 1970s with the oil crisis, the peso experienced a lot of devaluation due to debt defaults and other issues. In 1993, the Mexican government issued a new currency known as the new peso. One new peso, indicated by N$1 is equivalent to 1,000 old pesos (or 1,000 MXP).

To get your 1 oz 5 Peso Mexican Silver Brasero Efigie , call JM Bullion today at 1-800-276-6508 or order online. You can also reach out via chat or email. Act fast, because only 2,000 of these coins were minted, so availability is very limited!