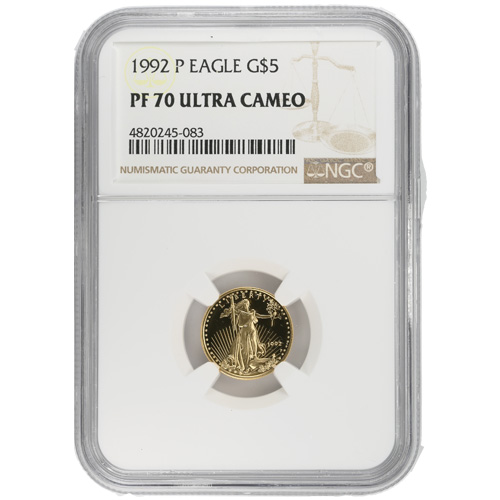 The Proof Gold Eagle coins from the United States Mint are the official collectible version of the nations gold bullion coin. American Gold Eagle coins feature iconic images of Lady Liberty and the nations official symbol, the bald eagle. In the proof collection, youll find four weights available to purchase when you shop. The 1992 1/10 oz Proof American Gold Eagle Coin is currently available to you from JM Bullion with a perfect NGC certification.

The 1992 Proof American Gold Eagle coins had lower mintage figures compared to 1991, part of a downward trend in demand for the collectible gold coins that stretched from 1991 to 1993. Generally speaking, demand for the Proof Gold Eagles remains relatively steady and lacks the severe jumps up and down seen in the bullion option.

For the 1992 release of American Gold Eagle Coins, the United States Mint made a rare and minor alteration. When the coins in the series, both bullion and proof, were released in 1986 the date marks on the obverse were set in Roman numerals. Beginning in 1992, the US Mint used Arabic numerals to denote the year of issue instead.

On the obverse of the 1992 1/10 oz Proof American Gold Eagle coin is a vision of Liberty that was brand-new for the 20th century and remains iconic to this day. Created by Augustus Saint-Gaudens, Liberty walks forward from Washington DC with her gown and hair flowing freely in the breeze as a confident and forceful guiding light for the nation.

The reverse of the 1/10 oz Proof American Gold Eagle coin features a family of nesting bald eagles. The male flies overhead as a female stands guard over the group of hatchlings in the nest. This image was created specifically for the Gold Eagle Series in 1986 by Miley Busiek.

We encourage JM Bullion customers to contact us with questions at 800-276-6508. You can also connect with us online through our live chat and email options.