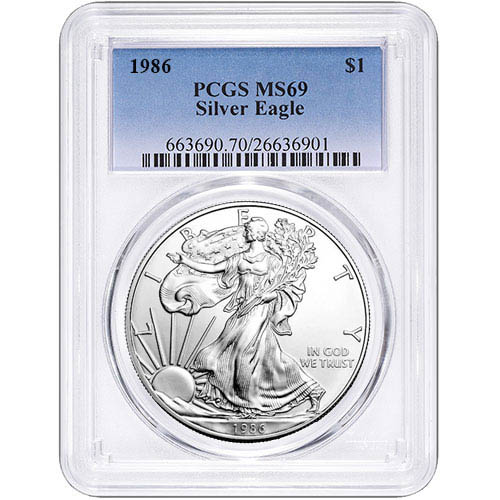 The American Silver Eagle coin is Americas official silver bullion product. Introduced in 1986, the investment-grade version of the coin has been struck and released in every year since its debut, but that first year of issue remains among the most sacred in the collection. Today, 1986 1 oz American Silver Eagle Coins are available to you online from JM Bullion in near-perfect condition.

1986 saw the introduction of the Silver Eagle in both bullion and proof options. The bullion coin sold a total of 5,393,005 units in its debut year, a figure that was dwarfed on year later and that has been surpassed on numerous occasions since that time. Nonetheless, the first year of issue is a sought-after date mark in any coin collection.

These 1986 1 oz American Silver Eagle Coins are available to you today with a near-perfect certification from the PCGS. Coins with a Mint State 69 grade feature full, original mint luster with a maximum of two minor detracting flaws. Examples of acceptable flaws at this grade level include only minuscule contact marks or hairlines found outside of the primary focal points of the coin.

The reverse face of 1986 American Silver Eagle coins includes the heraldic eagle of the United States. This design has been in use since 1794, but this is the latest modification to that image. It was modernized in 1986 by John Mercanti for use on the Silver Eagles. It features the bald eagle behind the US national shield as it clutches the arrows of war and the olive branch of peace.

Although these bullion 1986 American Silver Eagle coins bear no mint marks, the US Mint began production of the coins at the San Francisco Mint. The San Francisco location would strike the bullion versions from introduction until the 1998 release. On an interesting note, the price of silver has changed significantly since these coins were first struck. The average price per ounce of silver in 1986 was just $5.47.