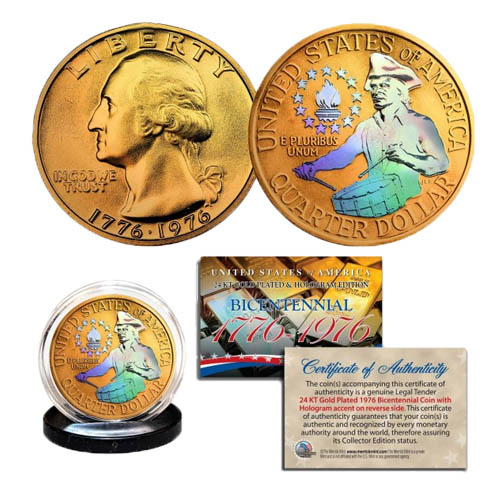 The Bicentennial Quarter was produced by the US Mint in honor of the 200th anniversary of the signing of the Declaration of Independence. These coins were released from July 4th, 1975, until December 31st, 1976. Due to incredible popularity, nearly 2 billion of these quarters were released. To celebrate this coin, the Merrick Mint has taken genuine bicentennial quarters and applied them with 24-karat gold plating and proprietary hologram visuals. Now, 1976 Bicentennial Prism Hologram Quarters are available to you for purchase online from JM Bullion.

As the bicentennial of the signing of the Declaration of Independence approached, the United States Mint decided it would be fitting to release a coin in honor of the occasion. It was determined that a new quarter would be released with the traditional portrait of Washington and an updated reverse design. In 1973, the US Treasury held a contest for the new design, which was ultimately won by Jack L. H Ahr. Between 1975 and 1976, roughly 1.7 billion bicentennial quarters were issued. However, there is no indication on the coins themselves if they were minted in 1975 or 1976.

Each 1976 Bicentennial Hologram Quarter will arrive housed inside an acrylic capsule. You will also receive a Certificate of Authenticity from the Merrick Mint. These coins are genuine US Mint-issued quarters that have undergone visual enhancements on the front and back.

The obverse of these 1976 Bicentennial Prism Quarters features a bust of George Washington. This neo-classical style effigy was created by John Flanagan in 1932. It is the original portrait used for US quarters. Inscriptions include Liberty, In God We Trust, 1776-1976.

On the reverse side of the 1976 Bicentennial Quarter is a colonial drummer. Wearing period-appropriate clothing, the drummer appears with both sticks in hand and the drum hanging from his neck. Additional design elements include a victory torch encircled by thirteen stars. The stars represent the 13 states that were part of the union when the Declaration was signed. Inscribed on the reverse are the words United States of America, Quarter Dollar, E Pluribus Unum.

JM Bullion customer service can assist you at 800-276-6508 with any questions you may have. Alternatively, you can reach us online through our live chat and email address features.