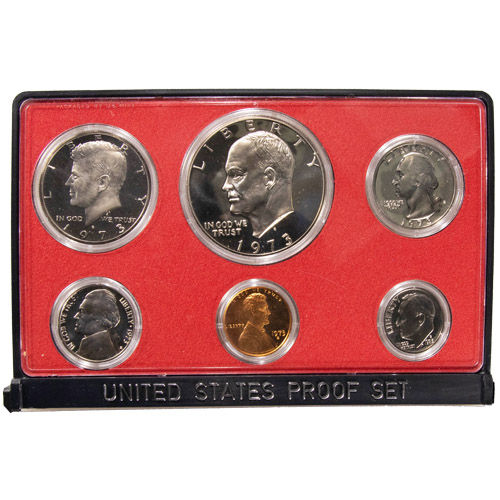 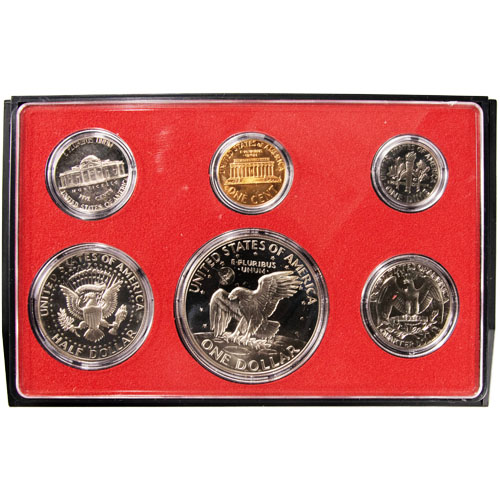 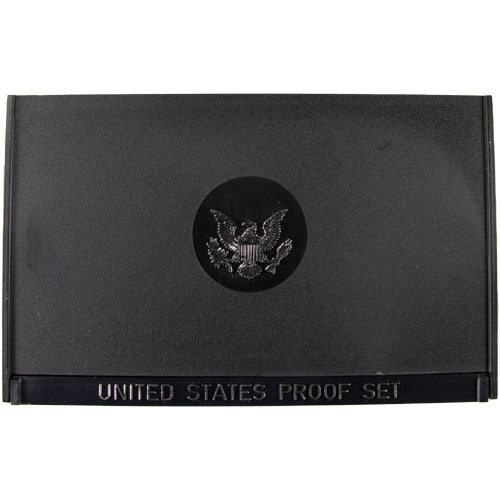 For the first time since 1904, a US Mint Proof Set includes a One Dollar coin. The Mint added the copper-nickel clad version of the Eisenhower Dollar to the 1973 Proof Set, making it a 6 coin set. With the additional coin in the set, the Treasury felt it was justified in increasing the price of the set. Sales did fall off a bit from 1972 levels, but still managed to sell 2,760,339 sets in 1973. The Proof finish on these coins enhances their beauty. This set was made by the US Mint in San Francisco. This 1973 US Mint Proof Set is currently available for purchase online from JM Bullion.

The Proof Set includes one each of the Lincoln Cent, Jefferson Nickel, Roosevelt Dime, Washington Quarter, Kennedy Half Dollar, and Eisenhower Dollar. This is the first year that the larger Eisenhower Dollar was included.

The coins are sealed in a two-piece clear plastic case. A red felt-covered paper insert was included to make the coins really stand out. The clear plastic case is then inserted into a black plastic frame, with a hinged flap that can be flipped over to display the coins.

Both the obverse and the reverse of the Eisenhower Dollar were designed by Frank Gasparro, the Chief Engraver of the US Mint.

The reverse of the Eisenhower Dollar is a tribute to the Apollo 11 mission. This was deemed appropriate since the space program began during Eisenhower’s administration. It features a bald eagle landing on the moon’s surface, carrying an olive branch. A depiction of the Earth is in the distant background.

Should you have any questions, the JM Bullion Customer Service team is available to answer them. We can be reached via phone at 800-276-6508, via our online live chat, or via email.