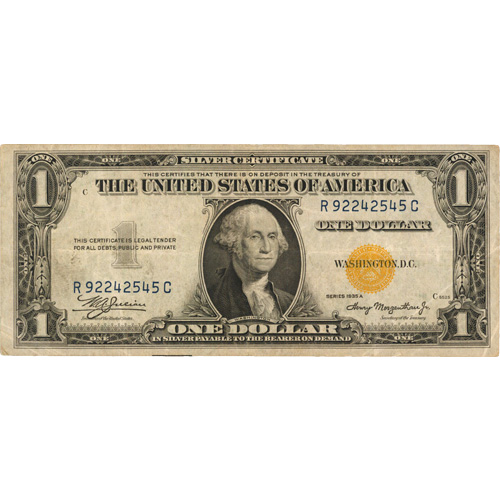 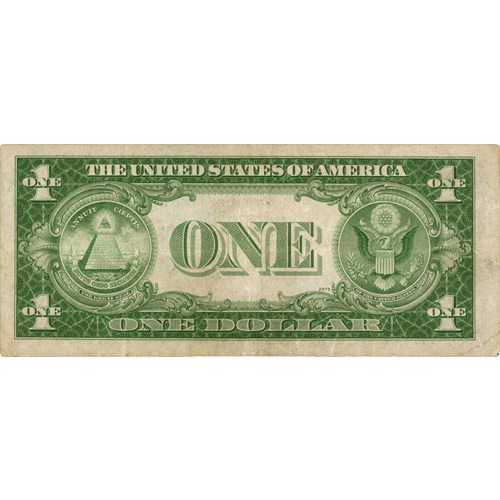 The 1935a Series of $1 Silver Certificates from the United States is one of the most historically relevant notes issued in this long-running series. Though the notes were initially redesigned in 1935, the 1935a is a subset of 1935A Series notes that were issued as special releases for US Troops in North Africa and for use in Hawaii. The 1935a North Africa Note featured a yellow seal, an instant identifier to US authorities so the notes could be demonetized quickly during World War II. Now, Very Fine+ 1935a $1 Silver Certificate North Africa Notes are available to you for purchase online from JM Bullion.

The 1935 Series of $1 Silver Certificates marked the first design of the $1 denomination of American paper similar to what is now in circulation on the $1 Federal Reserve Note. This was the third series of $1 Silver Certificates in the small-sized format and just the second change to the reverse field of the notes in the small-sized series. The reverse designs were personally approved by President Franklin D. Roosevelt.

These 1935a $1 Silver Certificates were specifically issued by American troops serving overseas in North Africa during World War II. First issued in 1942, the notes were given a yellow US Treasury seal as an easy way of distinguishing the notes from other circulating 1935 Series $1 Silver Certificates. In the event that the US lost its foothold in North Africa or the notes fell into enemy hands, the yellow seals would enable the US to immediately identify the currency as being captured by the enemy and demonetized, indicating the notes would not be accepted for transactions.

On the obverse of 1935a $1 Silver Certificate Notes is an effigy of President George Washington. The changes on this side from the 1934 Series include the lack of blue ink on the 1 printed to the left of Washingtons effigy. Additionally, when compared to all other 1935 Series $1 Silver Certificates, the US Treasury seal was printed in yellow ink. Only the $1 denomination received this North Africa release.

The reverse of the 1935a Silver Certificate Note features the designs that debuted with the 1935 Series. Authorized by President Franklin D. Roosevelt, the images depicts the all-seeing eye on the left and the Great Seal of the United States on the right.

These 1935a $1 Silver Certificate North Africa Notes are available in Very Fine condition. Notes in this condition have moderate signs of wear and tear, mild soiling, and numerous fold lines. The paper in a legal tender note in this condition remains crisp and relatively clean. Each one comes with a protective currency sleeve.