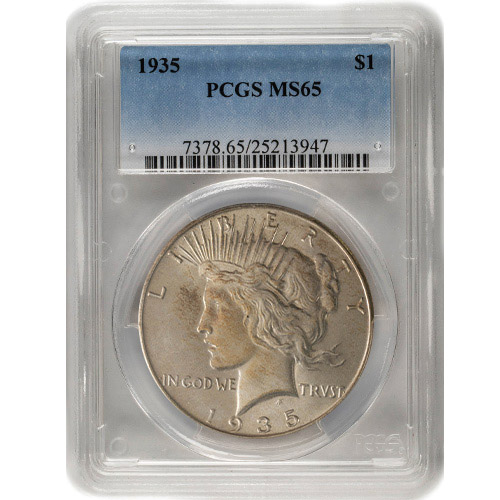 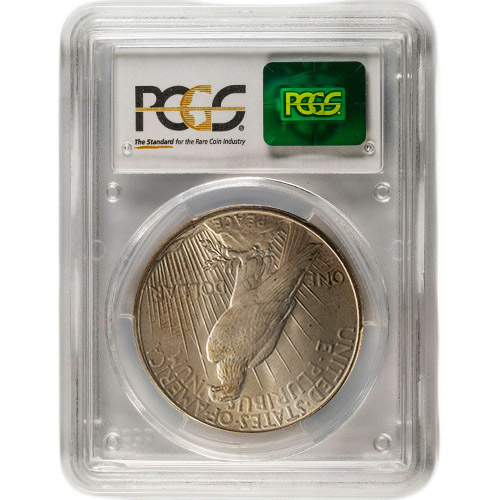 In the wake of World War I, Americans were celebrating a newfound sense of peace. In that spirit, the Peace Silver Dollar was created. The dollar quickly became popular with the public and today is considered one of the more iconic coin designs in the US Mint’s history. In this listing, you will find a Peace Dollar struck in 1935, which was the final year of standard production for this American classic. Currently, certified 1935 Peace Silver Dollar Coins are available to you for purchase online from JM Bullion.

At the American Numismatic Association in 1920, coin collector Farran Zerbe wrote an article in favor of the production of new silver dollars in honor of peace. Given the fact that WWI was over and that the country was planning to begin producing silver dollars anyway, Zerbe saw no reason why a new design shouldn’t replace the previously minted Morgan dollars. He also noted that since Americans had given their silver to the war effort, a new coin would restore those lost dollars while also commemorating the peace of post-war America.

Lady Liberty is shown on the obverse of 1935 Peace Silver Dollars. Here we see Liberty in left-profile relief with a radiate crown atop her head. Following the neo-classical tradition, this portrait shows Liberty only from the neck upward. You will notice inscriptions on the obverse as well that read Liberty, In God We Trust, 1935.

An American bald eagle is depicted on the reverse side of 1935 Peace Silver Coins. Designer Anthony de Francisci captures the bird with its wings folded as it faces towards the right. In its talons, there is an olive branch. Because these coins are meant to signify peace, we do not see the arrows of war often found in the eagle’s talons in other coin designs. Inscriptions on the reverse read United States of America, E Pluribus Unum, One Dollar, Peace.

All 1935 Peace Dollar Coins were struck at the US Mint in .900 silver. The coins have been sent to PCGS for grading, where they were assigned a score of Mint State 65. This number is based on a grading scale that runs from 1-70. The coin will arrive inside a plastic slab that features an official label bearing the grade.

JM Bullion customer service is available to assist you with questions about silver for sale at 800-276-6508. Our team is also available online through our live chat and email address features.