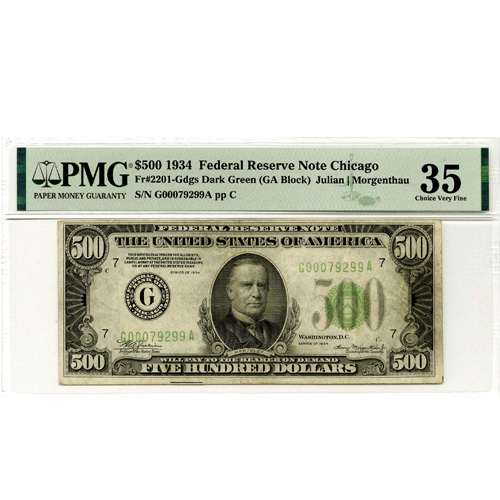 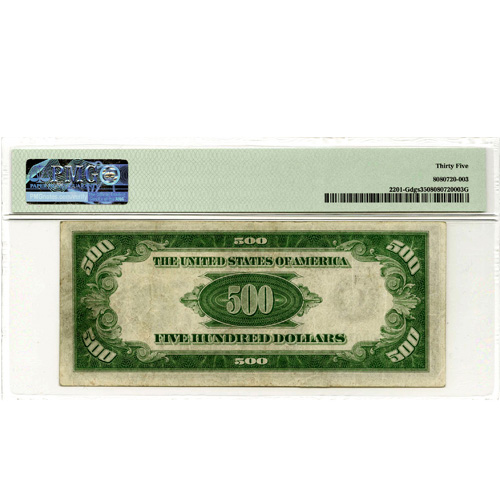 The 1918 Series included the introduction of $500, $1,000, $5,000, and $10,000 notes. Each of the designs on the notes was replaced across these four denominations in 1934. The 1934 Series was the last redesign for these larger notes. In the case of the $500 note, John Marshall was replaced on the obverse by President McKinley, while a vignette of Desoto discovering the Mississippi was replaced on the reverse by a simpler design with the denomination.

Obverse field of the 1934 $500 Federal Reserve Notes is a portrait of the 25th President of the United States. William McKinley had previously served as the Governor of Ohio and won election to the White House in 1896. His platform was based on rebuilding the American economy and using tariffs to boost up the manufacturing and industrial bases within the American economy. His first term in office was marked by economic revitalization and victory in the Spanish-American War.

Reverse designs of the 1934 $500 Federal Reserve Notes include a simple field. This side of the note comes with markings of the denomination and nation of issue. These notes have District Seals on the obverse denoting which branch bank of the Federal Reserve. Please keep in mind the district seals could vary or match on the notes you receive.

These 1934 $500 Federal Reserve Notes are available to you with a PMG certification. A Very Fine 35 note has exceptional visual quality and four to seven fold lines. Unlike other notes, a VF35 note has only light folds.

JM Bullion customer service is available to assist you at 800-276-6508. Our team is also available online through our live chat and email address features.