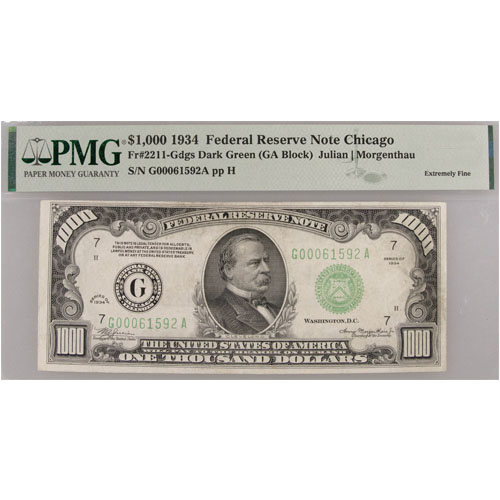 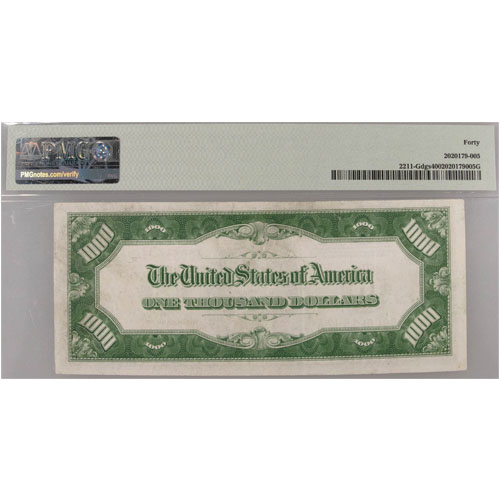 Modern Americans are becoming less accustomed to the concept of carrying hard currency around on a daily basis. Throughout much of the nation’s history, hard currency was a part of every transaction for goods and services. Even during this era though, there were notes that few Americans ever actually saw or held. Larger denominations of Federal Reserve Notes are a perfect example. Right now, 1934 $1000 Federal Reserve Notes in certified condition are available to purchase online from JM Bullion.

Each of the 1934 $1000 Federal Reserve Notes available here in this JM Bullion listing comes with a protective plastic currency sleeve. This plastic sleeve ensures the continued XF 40, or better, condition of the paper note. Bills and notes in this condition typically have a minimum of three fold lines, one of which may be horizontal. It is possible, though not guaranteed, that each note could have more than three fold lines.

The modern Federal Reserve Note was introduced in 1914. This series of paper notes debuted at a time when various forms of American paper currency were in circulation, including Silver Certificates and United States Notes. Compared to those other notes, the larger denominations of Federal Reserve Notes were rarely seen by the public.

Obverse designs on these 1934 $1000 Federal Reserve Notes include a portrait of President Grover Cleveland. This right-profile relief was printed in the classic porthole design portrait, a feature that debuted on American paper currency toward the end of the 19th century and became more commonplace in the 20th century. President Cleveland replaced the original design of Alexander Hamilton on this note during the 1934 Series overhaul.

Reverse visuals on 1934 $1000 Federal Reserve Notes offer only notations of the denomination of the bill, both numeric and alphabetic. The nation of issue is also printed on this side. These notes were predominantly used for bank-to-bank transactions in an age before electronic wire transfers existed.