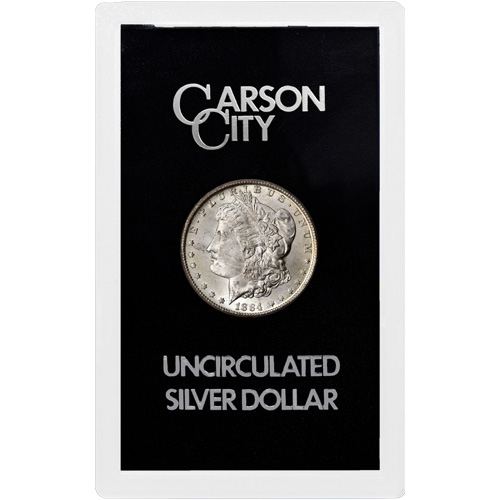 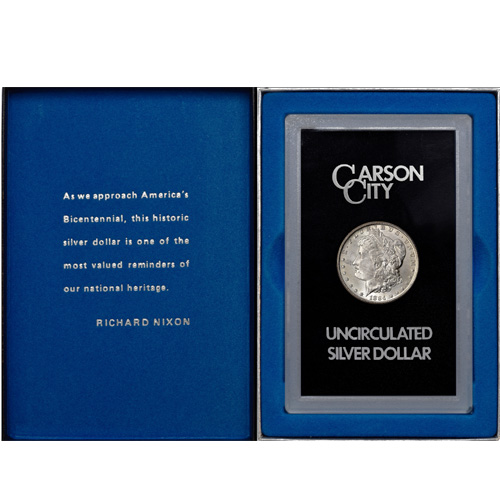 Each of the 1884-CC Morgan Silver Dollars you receive in this JM Bullion listing comes with the original packaging from the Government Services Administration. The GSA housed the coins inside of hard plastic holders when auctioning the US Treasury hoard of Morgan Silver Dollars to the public in the 1970s and 1980s. Each coin and plastic holder was released with a presentation box and a Certificate of Authenticity.

The 1884-CC Morgan Dollar is one of the most significant from the hoard of coins found in US Treasury vaults in the 1960s. The GSA completed an audit of the coins in the hoard following its discovery and found that 95% of the previously uncirculated coins came from the Carson City Mint. Its completed audit broke down the Carson City Mint coins by date, with the 1884-CC Morgan Silver Dollars found to have the highest volume in the lot at 962,000. With the original mintage back in 1884 totaling only 1,136,000 coins, the US Treasury hoard represented nearly 85% of the total issue. That means just 15% of the original coins actually ended up in circulation in the 19th century.

The obverse side of 1884 Morgan Silver Dollars features a bust of Liberty. This left-profile portrait of Liberty was inspired by teacher and writer Anna Willess Williams, the woman who sat through portrait sessions with George T. Morgan during the creation of the design.

On the reverse field of the 1884-CC Morgan Silver Dollar is an image of the heraldic eagle of the United States. This was also created by George T. Morgan and showcases an American bald eagle in front-facing relief.