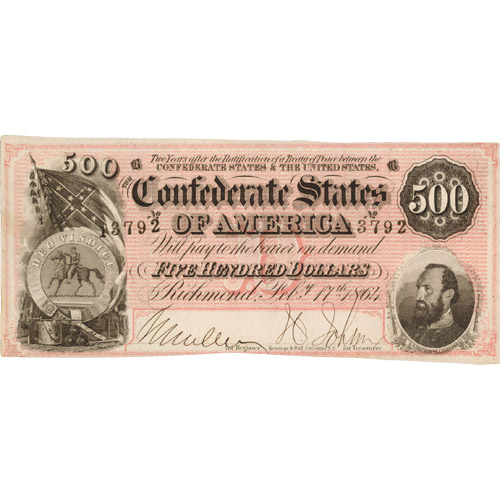 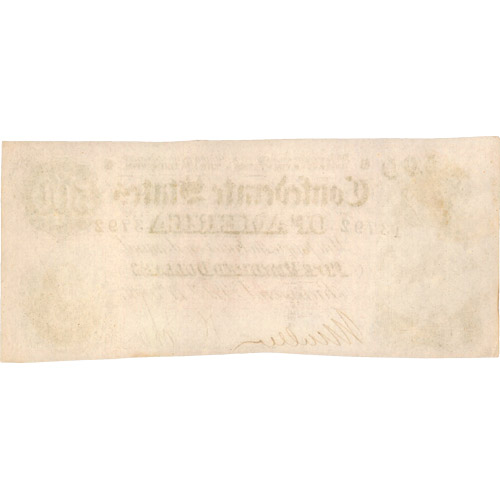 In the months before hostilities commenced in the United States Civil War, the Confederate States of America began to issue its own forms of currency. The coins and notes of the Confederate States dollar no longer possess a legal face value, but the surviving notes from this era represent a unique option for collectors. Right now, 1864 $500 Confederate States Notes in circulated condition are available to purchase online from JM Bullion.

Each 1864 $500 Confederate States Note offered in this listing comes with a protective currency sleeve. These notes are in uncirculated condition and come with only minor signs of handling that likely originated from the production and counting process as the notes were issued. The notes will not feature fold lines, but may show off-center designs or edge elements that stray from the margins to the central field.

Confederate States notes were not issued by a central authority within the Confederacy, but rather were issued with the backing of the government by several private entities. As an example, these 1864 $500 Notes were produced by Keatinge & Ball of Columbia, South Carolina. The company was among a handful chosen as its experience as a lithographic firm provided experience in paper handling and production.

On the obverse side of 1864 $500 Confederate States Notes is an ornate design element. To the left side of the note, you will find the seal of the Confederate States of America with the second national flag. On the right side of the note, you will notice a left-profile portrait of Stonewall Jackson, one of the Confederacy’s most talented battlefield tacticians. Confederate notes are memorable for the uneven edges as most were cut by hand, as well as the handwritten signatures of treasurers from the individual issuing companies.

The reverse field of 1864 $500 Confederate States Notes is left blank on purpose. It is possible that you will see bleed-through of the inks used on the obverse side. Please keep in mind that we cannot guarantee the exact condition of each note. While each one is in uncirculated condition, the minor flaws present may vary from one to the next.