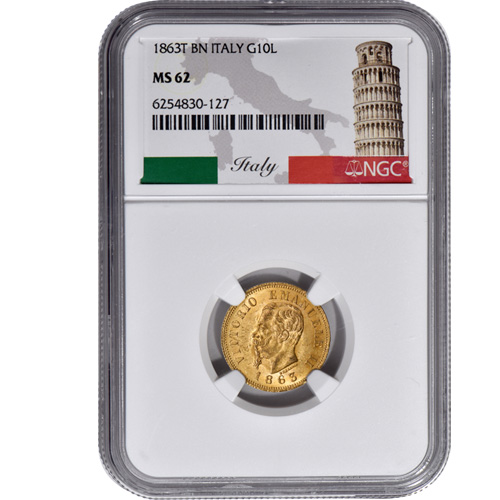 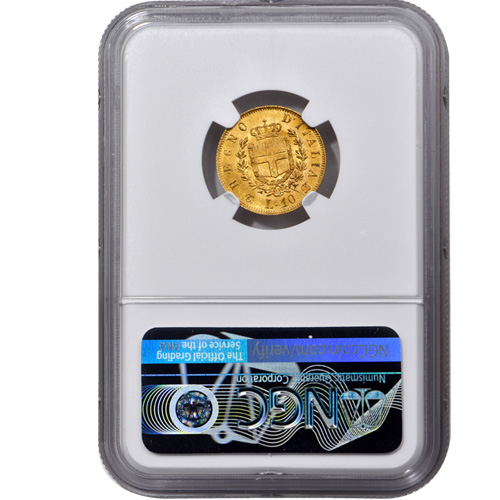 The various Italian states and kingdoms were unified in 1861 as a singular Kingdom of Italy under the rule of Victor Emmanuel II. Previously the King of Sardinia, he rose to unify all of Italy and one of the first coins issued in his reign was the 10 Lire Italian Gold Coin. Now, 1863 10 Lire Italian Gold Coins in certified condition are available to you for purchase online from JM Bullion.

The House of Savoy first established its rule in some regions in 1003 CE. Victor Emmanuel II came to the throne of a unified Kingdom of Italy having been the King of Sardinia, a land that the House of Savoy had controlled for hundreds of years. In 1861, Victor Emmanuel II arose to claim the title of King of Italy as he formed, and later expanded, the Kingdom of Italy through warfare and diplomacy.

The obverse side of 1863 10 Lire Italian Gold Coins features a left-profile depiction of Victor Emmanuel II. The inscriptions on this face of the coin include the Italian words Vittorio Emanuele II with a date mark. King Victor Emmanuel II reigned over a unified Kingdom of Italy from 1861 until his death in 1878. He took on the title from the Latin phrase Pater Patriae often given to Roman emperors, with Italians of the 19th century referring to him as the Father of the Fatherland.

On the reverse field of the 1863 10 Lire Italian Gold Coin is a depiction of the coat of arms of the Kingdom of Italy. The shield is crowned and bears a cross separating its quadrants. An oak and laurel wreath frames the shield and an inscription of face value is featured at the bottom.

These 1863 10 Lire Italian Gold Coins are available to you for purchase in Mint State 62 condition. Coins with this grade showcase clusters of small contact marks through with large marks or detractions possible in the primary focal fields. Hairlines are likely to be noticeable on the coins with unattractive scuff marks also possible. The NGC slabs contain a custom label card with the Italian flag, a map of Italy, and an image of the Leaning Tower of Pisa.