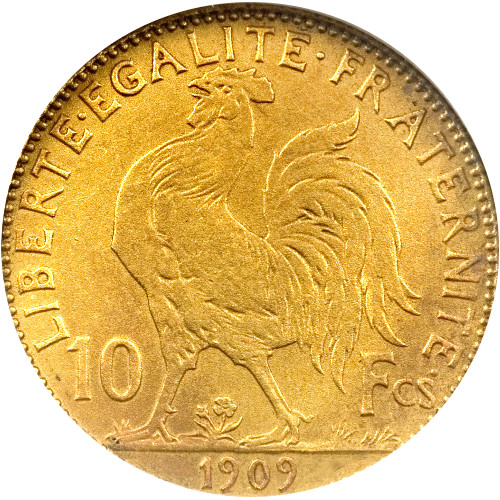 *Please note that these coins are being offered from the year of our choice and as such there are three possible coin designs you will receive. Based on our inventory at the time you place your order, our staff will choose either the Rooster, Helvetia or Napoleon III design.

One of the most well-known circulation coins from human history is the Franc. Produced in both Switzerland and France over the course nearly 100 years, it served a role similar to that of the Euro today, being one of the most traded and used coins on the European continent. Today, JM Bullion offers you the chance to purchase a 10 Francs Gold Coin, with random years of issue and condition available.

There are many designs that appeared on the 10 Francs Gold Coin during its production run. Among the most famous designs was the Gallic Rooster, which remains today as an unofficial symbol of France. The 10 Francs Rooster Coin was struck from 1899 to 1914 and featured the Gallic Rooster in the midst of a confident stride. The French national motto of “Liberte – Egalite – Fraternite” featured on the obverse along with the rooster.

Another popular design was the original design used on the 10 Francs Gold Coin, that of Napoleon III. Struck from 1854 to 1860, these coins featured a right-profile portrait of Napoleon III on the obverse, with the engravings “Napoleon III” and “Empereur” surrounding his bust.

Among the other popular designs you’ll find the Helvetia design. Produced during the tail end of the Francs history, the coin featured the image of Helvetia, the female embodiment of the nation of Switzerland on its obverse.

Each of the 10 Francs Gold Coins available to you in this product listing is available with random years of issue. Additionally, the condition of any given coin cannot be guaranteed until the time of fulfillment. The exact coins you receive, in design, condition, and year of issue, will be determined by availability.

Many of these coins were produced either by the Monnaie de Paris, founded in 864, or the Bern Mint in Switzerland.

If you have any questions, a JM Bullion associate will be happy to help out. Feel free to call us at 800-276-6508, connect with us online using our live web chat feature, or submit your questions to us in writing via email. To see similar products, check out our selection of World Gold Coins.

Ronald from CA - August 02, 2015
"Received a coin dated 1862, empire coin. Somewhat used, a little pock mark in old Napoleon's cheek but it's over 150 years old. May we all look that good. At least a very fine coin, with numismatic value to collectors. Already had a 20 franc coin from that era, so it's a nice addition to the small stack."