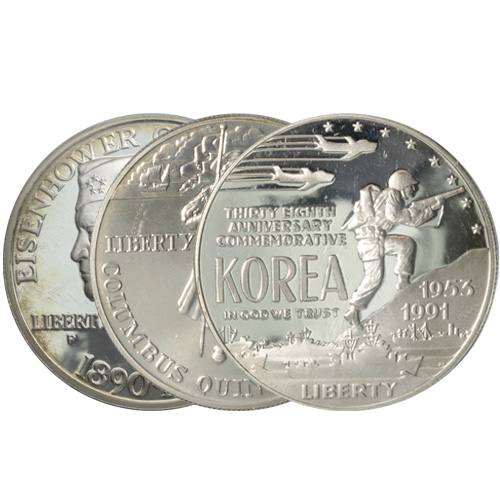 The United States Mint regularly issued commemorative coins from the 1840s until 1956. The Eisenhower Administration canceled all future commemorative issues as the quality of US Mint designs had come under question from collectors and general interest was dropping amidst that same group of buyers.

In 1982, modern US Mint commemoratives returned with the release of a 250th-anniversary half dollar honoring the birth of President George Washington. Starting in 1983, the most common and popular US Mint commemorative coin format debuted: US silver dollars. Since that time, almost every release year has featured a $1 US Mint Commemorative Silver Coin.

Obverse and reverse design elements will vary on the $1 US Mint Commemorative Silver Coin you receive. The US Mint issues new designs in this format each year, with the first coming in 1983 when the US Mint issued a 1984 Summer Olympics silver dollar in honor of the upcoming games in Los Angeles that year.

An example of a popular $1 US Mint Commemorative Silver Coin you could receive is the 1990 Eisenhower Centennial Dollar. The coin was issued in honor of the 100th anniversary of Dwight D. Eisenhowers birth in 1890. The coin features an obverse bust with two portraits of Eisenhower. One captures him in the role of Supreme Allied Commander in Europe during World War II, while the other shows him as the elder statesmen when he later served as President of the United States of America for two terms through the 1950s. The reverse shows his home near Gettysburg, Pennsylvania.

These $1 US Mint Commemorative Silver Coins are available to you in varied conditions. All of the coins ship inside of individual plastic flips and many will feature 90% silver content and 10% copper. However, more recent commemorative dollars have .999 pure silver content. Conditions will vary on these coins. Please note that purchasing multiple coins can result in receiving items that all have the same designs and conditions. We cannot guarantee any specific coin designs or conditions for you.

JM Bullion customer service is available at 800-276-6508. Alternatively, you can reach out to us online through our live chat and email address features.