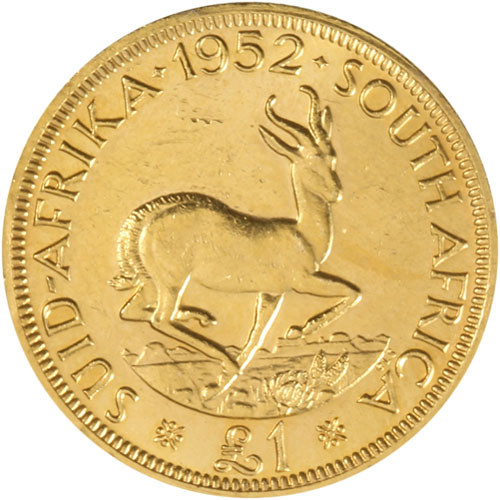 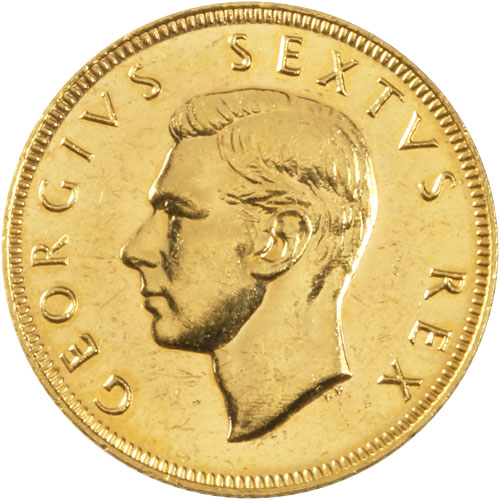 As a former colony of Great Britain, South Africa once issued various gold coins based on the English pound. These included both pound coins issued by Paul Krugers South African Republic and the Union of 1910 that created the predecessor to the modern state and its own pound gold coins. Right now, 1 Pound South African Gold Coins are available to purchase online from JM Bullion.

Each 1 Pound South African Gold Coin available in this product listing comes with its own protective plastic flip. The coins are offered in varied conditions from random years through this JM Bullion listing. The gold coins for sale here are chosen at random by JM Bullion after your payment is processed.

We cannot guarantee the particular coin you will receive as all items are chosen are picked from our available inventory in the moment. If you purchase more than one gold coin, please keep in mind you could get matching dates, designs, and conditions for the coins you receive.

The obverse and reverse designs on the 1 Pound South African Gold Coins vary by the date mark and the series in which the coins were released. Burgers Pounds do not exist anymore, but Kruger Pounds are still around. These coins feature Paul Krugers bust on the obverse and the republics coat of arms on the reverse.

More recent 1 Pound South African Gold Coins were issued by the Rand Refinery and South African Mint between 1910 and 1961 with a bust of the reigning British monarch on the obverse and the Springbok antelope on the reverse.

If you have any questions about these coins, please feel free to ask. JM Bullion customer service is available at 800-276-6508, online through our live chat, and via email.