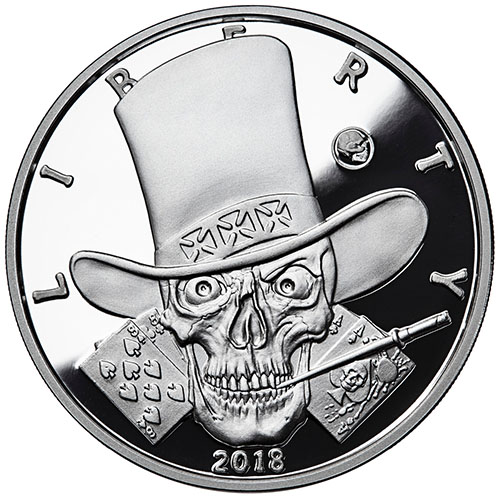 The American Western Skulls Collection struck by the Osborne Mint is out with a seventh design that moves away from a theme of law and order to feature other popular characters that formed the backbone of popular notions of the American West. Beyond the concept of lawless confrontations between “cowboys and Indians,” the west was a place where any rogue could try their hand at luck. Right now, 1 oz Proof American Western Skulls Gambler Silver Rounds are available to purchase online from JM Bullion.

Each of the 1 oz Proof American Western Skulls Gambler Silver Rounds in this release comes with an individual protective capsule. Included with your purchase today is a numbered Certificate of Authenticity courtesy of Osborne Mint. The silver rounds each have a unique serial number struck onto the edge which is reflected on the included COA.

The Proof American Western Skulls Gambler Silver Round has standard proof visuals. The design elements of the round are frosted, while the background field is mirrored to create a visual contrast between the two.

When one thinks of the American West, frontier gamblers often come to mind. Depicted in movies, TV series, and cultural tales alike, the gambler was a stock character and was usually portrayed as a gentlemanly southerner living a life outside the bounds of law and order.

On the obverse of the 1 oz Proof American Western Skulls Gambler Silver Round is the image of a wide-eyed gambler with a long cigarette in his mouth and a massive top hat. Not one to immediately resort to violence, though not unthinkable that he would, the Gambler Silver Round doesn’t use a weapon in the crossed design at the bottom. Instead, the design features the famed Dead man’s hand of aces and eights.

Many of the most famous gamblers of the Wild West were also lawmen who frequented the betting tables in bars, saloons, and proper casinos when they weren’t putting bad guys in the ground. Wild Bill Hickok was a folk hero of the Wild West and popularized the use of Dead man’s hand to define aces and eights as he was killed in a saloon while purportedly holding this hand in a game of poker.

The reverse of Proof American Western Skulls Gambler Silver Rounds includes the fried eagle design. This deadly riff on the heraldic eagle of the United States replaces a live bird with the skeletal remains of an eagle.