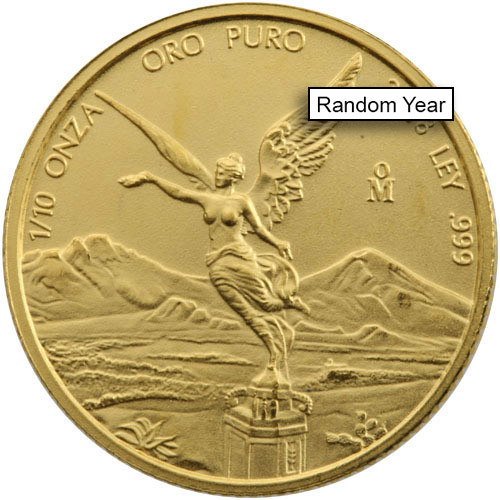 The first major gold coin released by the Mexican Mint in the modern era was the Centenario. Introduced in 1921, this 50 peso circulation gold coin was meant to commemorate the 100th anniversary of Mexican independence from Spain. While the Centenario has not been struck, circulation or commemorative, since 1972, its imagery lives on today on the Gold Libertad. The 1/10 oz Mexican Gold Libertad Coin is available to you today for purchase online from JM Bullion.

Mexican Gold Libertad coins debuted in 1981 with 1 oz, oz, and oz options as the nations new gold bullion coin program. The images used on the Gold Libertad today were taken directly from Mexican history, emerging from the archives of the Centenario program. The Centenario featured the coat of arms on one side and Winged Victory on the other.

The Mexican Mint originally issued the Centenario as a circulation coin from 1921 to 1931 as part of the nations centennial celebration of freedom from Spanish rule. However, the demand for gold coins during World War II was enough to convince the mint to bring back the Centenario. This time the Centenario was struck from 1943 to 1972 as a commemorative coin. From 1949 to 1972, all coins in the release were marked as 1947 issues.

On the obverse of the modern 1/10 oz Mexican Gold Libertad youll see the coat of arms for the nation. This is the latest version of that seal, which features an eagle locked in battle with a serpent as it sits perched on a cactus.

The reverse of all 1/10 oz Mexican Gold Libertad coins features the modern design of Winged Victory, or Winged Victoria. This lady of independence to the Mexican people is based upon the ancient Roman religions goddess of victory, a personification of victory. Her figure stands some 22-feet tall in real life in the center of Mexico City atop the Mexican Independence Victory column, erected in the same year the Centenario was originally released.

JM Bullion offers you the 1/10 oz Gold Libertad today from random years of issue. The 1/10 oz coins are available with years of issue from 1991-1994, 2000, and 2002-present. The highest mintage year was 1992 with 50,777 coins, while the lowest years were 2003 and 2017 with 300 coins each. We cannot guarantee the year of issue you receive as this will be determined by availability in our warehouse when your order processes for shipping.