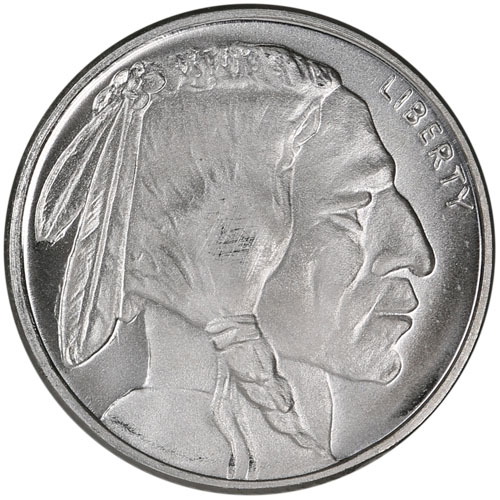 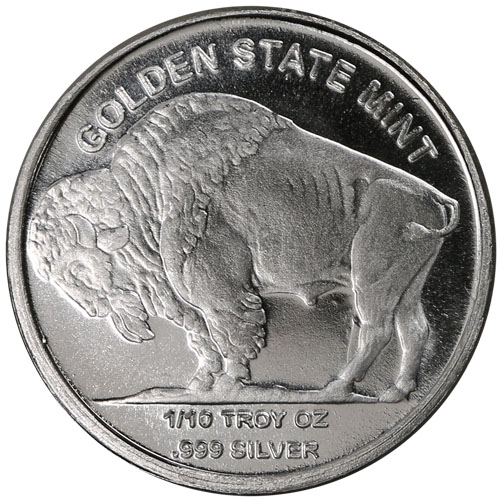 As low as $3.94 per round over spot!
Add to WishlistLog In to add this product to your Wishlist
Free Shipping on $199+ Orders

The Buffalo Nickel was one of America’s most beloved circulation coin designs. Appearing on the 5-cent piece from 1913 to 1938, Americans carried around a nickel coin with a Native American and Buffalo on the faces of the coin long before President Thomas Jefferson graced the coin’s faces. Right now, 1/10 oz GSM Buffalo Silver Rounds are available to purchase online from JM Bullion.

Each of the 1/10 oz GSM Buffalo Silver Rounds available to you in this product listing is produced by the Golden State Mint in the United States. These rounds have a lustrous finish and contain 1/10 Troy oz of .999 pure silver featuring the classic designs from the Buffalo Nickel coin. Individual coins are available to you in protective flips, with multiples of 50 packaged in tubes.

James Earle Fraser was an American sculptor who created countless public monuments and private works during the early 20th century. He was also one of many sculptors commissioned by the federal government and US Mint to help revitalize American coin design during the first two decades of the 20th century.

On the obverse of these 1/10 oz GSM Buffalo Silver Rounds, you’ll find the image of an indigenous tribal leader from North America. The figure is captured in right-profile relief and wears braided hair down his shoulder with two feathers woven into his braid at the top of his head. The word “Liberty” is engraved on this side.

Fraser was a native of Winona, Minnesota, and spent much of his childhood on the plains of the Midwest and Upper Midwest following his father around. His father, Thomas Fraser, was an engineer working for the railroad companies laying tracks across Minnesota, the Dakotas, Nebraska, and Kansas to the American West.

The reverse of the 1/10 oz Buffalo Silver Rounds from Golden State Mint include the design known as Black Diamond. The American bison depicted here stands on a mound of dirt and was inspired by a real-life bison of the same name which resided at the Central Park Zoo in New York City during the early 20th century.

If you have any questions about these silver rounds for sale, don’t hesitate to ask. JM Bullion customer service is available to you at 800-276-6508, online using our live chat, and via our email address.