It’s hard not to overstate the popularity of the Queen’s Beast Series of gold and silver coins for sale from the Royal Mint of England. The now-popular series launched in 2016 with the Lion of England design available on the first-ever 2 oz silver bullion British coin, along with a 1/4 oz and 1 oz gold option for investors. The series has grown to include silver and gold proofs for each design release, introduced in 2017, as well as a 10 oz silver bullion coin and 1 oz platinum coin. The latter options were also introduced by the Royal Mint in 2017. As this 10-coin series winds towards its conclusion in 2021, the second design on 2019 dated coins is currently on presale with JM Bullion as the Yale of Beaufort makes its debut. 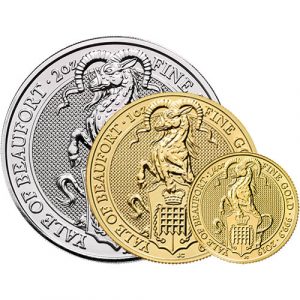 The Yale of Beaufort Design

The Yale of Beaufort design on the Queen’s Beast Series of coins from the Royal Mint depicts the mythical beast holding a crest with a crowned shield that includes quartered segments. The banner is the official arms of Lady Margaret and features a portcullis at the center, the latter of which was a badge used by her son King Henry VII. The portcullis is also featured in the arms of the Westminster City Council, the city which is home to Westminster Abbey where Queen Elizabeth II was crowned in 1953 and where the statue of the Yale of Beaufort stood during that ceremony.

What is a Yale?

The Yale is one of the more anonymous mythical creatures of history. Its appearances are largely confined to European mythology and the heraldry of certain kingdoms. Most depictions of the Yale showcase an antelope- or goat-like beast with four legs, the tusks of a boar, and large horns on the head. The horns are one of the many facets of its imagery that change with regularity as some horns are short and compact, while others can twist seemingly forever and even face in opposite directions from one another.

Although the Yale is often depicted as an antelope- or goat-like beast, one of the first written accounts of the beast from Pliny the Elder describes an animal “the size of a hippopotamus, with the tail of an elephant and a black or tawny coloration. It has the jaws of a boar and movable horns that can turn in various directions.” The Yale came into the British Royal Family’s heraldry courtesy of King Henry VII, founder of the House of Tudor and the son of Lady Margaret, daughter and heiress of John Beaufort, Duke of Somerset.

About the Yale of Beaufort

John Beaufort’s daughter Margaret was his only heir upon his death in 1444. Known as Lady Margaret Beaufort later in life, she carried the Yale of Beaufort as a personal seal handed down from her father’s family. Lady Margaret was married four times in her life, but the only union to produce a child was her second marriage to Edmund Tudor, Earl of Richmond. The pair had a son named Henry who would go on to etch the family name into history at the conclusion of the Wars of the Roses.

Oddly enough, Lady Margaret’s father was the great-grandson of the Plantagenet monarch King Edward III. Fast forward to the 15th century and England was at war between competing houses. During the Wars of the Roses, the first king from the House of York (a Plantagenet cadet house) rose to power. Battling back and forth between the House of Lancaster and House of York actually resulted in the final Plantagenet king, King Richard III, dying in battle at Bosworth Field in 1485. The victor that day? The future King Henry VII, son of Lady Margaret. Henry VII would go on to establish the House of Tudor that would reign until the 1603 death of Elizabeth I and his mother Margaret remained an influential figure. Lady Margaret outlived her son by two months to see her grandson, Henry VIII rise to the throne, and is credited with founding Christ’s College and St. John’s College in England.

Upcoming Releases & Versions to Watch For

Currently, JM Bullion has the three primary bullion options available to purchase from this release in the Queen’s Beast Series. However, the Royal Mint, as mentioned, does offer an impressive variety of Queen’s Beast coins for both investors and collectors. In the months following the issue of the three main bullion coins, you can expect to find the Yale of Beaufort designs available on 10 oz silver and 1 oz platinum coins. Additionally, the proof release of the coins is just around the corner.

In the proof collection, the Royal Mint of England offers the coins with set mintage caps and individual commemorative housing. The coins are typically packaged inside of capsules set within a Royal Mint display box and offered with a Certificate of Authenticity. The variety of weights offered is also more diverse in the proof range. JM Bullion will, in the future, carry 1/4 oz, 1 oz, and 5 oz Proof Gold Yale of Beaufort coins alongside 1 oz, 5 oz, 10 oz, and 1 Kilo Proof Silver Yale of Beaufort coins. We encourage to follow us on Facebook to find out when these coins arrive!

Once the 2019 Yale of Beaufort Queen’s Beast Coins are in stock, supplies won’t last long. Now’s your chance to get ahead of the rush and purchase your 2019 Yale of Beaufort coins on presale through JM Bullion. If you have any questions, please don’t hesitate to ask. You can call us on the phone at 800-276-6508, chat with us live online, or simply send us an email with your inquiries.