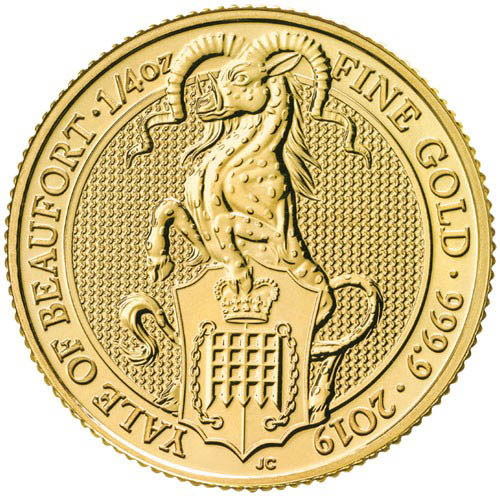 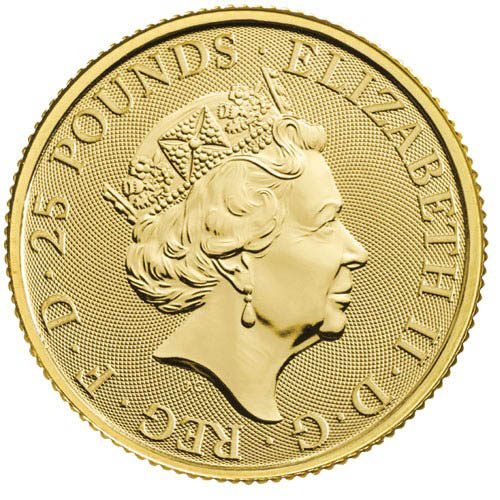 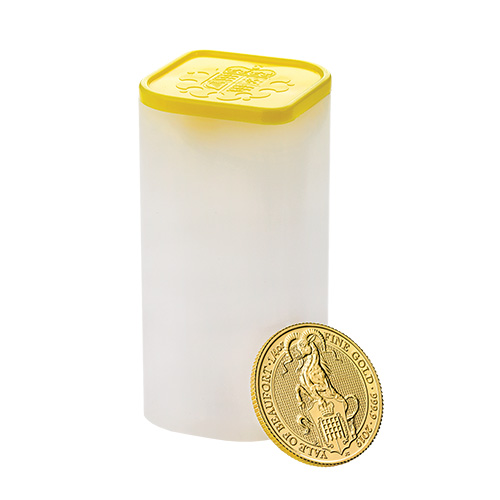 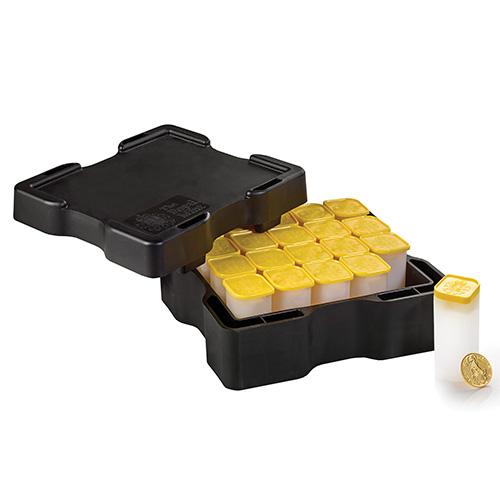 The bullion coins of the Queen’s Beast Series from the Royal Mint feature three primary options for those buying gold and silver. Each of the designs in the 10-coin collection includes a standard 1/4 oz gold coin, 1 oz gold coin, and a beautiful 2 oz silver coin. Today, 2019 1/4 oz British Gold Queen’s Beast Yale of Beaufort Coins are available to you online from JM Bullion.

All of the creatures depicted in the Queen’s Beast Series come to the Royal Arms of England from a unique historical standpoint. The Yale of Beaufort is both one of the most distinctive beasts and one that arguably has the most unique background story. The Yale of Beaufort was never hoisted by a monarch, but it was important to King Henry VII, founder of the House of Tudor.

These 2019 1/4 oz British Gold Queen’s Beast Yale of Beaufort Coins are available to you for purchase in Brilliant Uncirculated condition. The coins come with individual protective flips, mint tubes of 25 coins, or Monster Boxes of 500 coins housed in 20 tubes of 25 coins each.

On the reverse of 2019 British Gold Queen’s Beast Yale of Beaufort Coins is the mythical Yale. The Yale was depicted in various different forms throughout British history, with the most common beastly forms including an antelope or goat. Based on the level of imagination from the artist, the beast could represent grace and elegance or determination and strength.

The Yale of Beaufort was the symbol of Lady Margaret Beaufort. The daughter and only heiress of John Beaufort, Duke of Somerset, Margaret would marry four times in her lifetime. Her second marriage to Edmund Tudor resulted in a son who would go on to take the crown of England as King Henry VII to end the Wars of the Roses. Henry VII was the first monarch in the House of Tudor and reestablished Lancastrian rule over England after a period of Yorkist rule.

2019 1/4 oz British Gold Queen’s Beast Yale of Beaufort Coins feature the fifth-generation design of Queen Elizabeth II’s effigy on the obverse. Designed in 2015 by Jody Clark, this right-profile portrait of Her Majesty captures the Queen at age 89 wearing the Royal Diadem crown.

Please feel free to reach out to JM bullion with your questions. You can call us at 800-276-6508, chat with us online, or simply send us an email.