One of the most beloved animated series on American television is The Simpsons. The family of yellow characters first appeared on American TV sets in 1987 during 30-second segments featuring on The Tracey Ullman Show. After two years of growing interest in the characters, the family found a place on television each week with a half-hour series. Since 1989, The Simpsons animated show has become a worldwide phenomenon viewed in 60 countries and translated in over 20 different languages. Now’s your chance to purchase the five coins in a new collection of Perth Mint proof silver coins with a colorized finish. 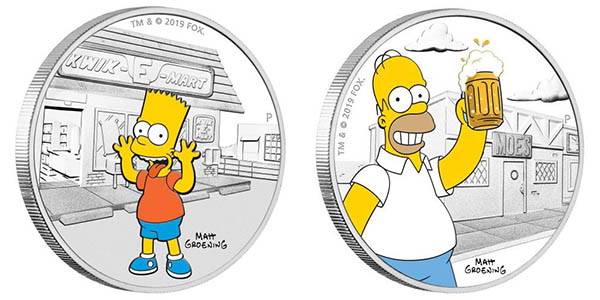 Last year, The Simpsons reached a milestone that no other television show has touched. In 2018, The Simpsons became the longest-running primetime scripted show. The Perth Mint is issuing a series of five character coins on behalf of Tuvalu. Each coin has 1 Troy oz of .9999 pure silver and is considered legal tender backed by Tuvalu with a face value of One dollar. The individual designs are available with a mintage of just 5,000 each.

All coins in the new series include the same obverse design. Queen Elizabeth II features in right-profile relief in the 1998 design by Ian Rank-Broadley. The fourth-generation design on the obverse was originally created for the Royal Mint of England and it depicts the Queen wearing her crown. Inscriptions include “Queen Elizabeth II,” “Tuvalu 1 Dollar,” “2019,” and “1 oz 9999 Ag.”

The reverse side of each of the coins includes its own unique design with a colorized depiction of one of the five main characters in the Simpsons family. The first two coins in this 2019 series include the images of the family patriarch and first-born child:

Each coin to be released in the Simpsons Proof Silver Coin collection comes with its own clear, acrylic case. The case enables you to view both sides of the coin at the same time while on display. The packaging includes a Simpsons-themed shipper and a numbered Certificate of Authenticity from the Perth Mint. All of the coin designs in this series are used under license from The Simpsons TM and 2019 Twentieth Century Fox Film Corporation.

While the Perth Mint is well known for its annual silver bullion coins such as the Silver Kookaburra, Silver Koala, and Silver Kangaroo, it also produces a vast lineup of collectible proof silver coins to mark commemorative occasions. For example, the 2019 release year has already seen 50th Anniversary Apollo 11 coins issued by the Perth Mint. Australia’s oldest operating mint is no stranger to the issuance of beautiful proof silver coins such as the five designs in The Simpsons Silver Coin collection.

The Homer and Bart Silver Coins in The Simpsons Collection are currently available online for you to purchase from JM Bullion. Make sure you keep tabs on our Facebook page and weekly blog posts for the remaining three designs in this series. The Simpsons Marge Proof Silver Coin is the next release. If you have questions, please call us at 800-276-6508, chat with us live online, or send us an email.