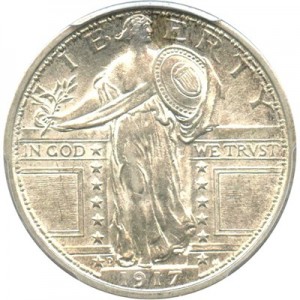 When it was first introduced, American citizens immediately fell in love with the Standing Liberty Quarter. Playing off the name of the earlier Seated Liberty, the Standing Liberties boasted a beautiful design that was as intricate as any coin of its day. Even though these coins were minted for less than 15 years, they have staked their claim in history as one of the most beautiful quarter designs ever thought up.

Minted from 1916-1930, the Standing Liberty had only a short stay in circulation. Nowadays, these coins are being bought up by collectors. Available in a wide range of conditions, the Standing Liberties are being bought up at a high rate. Of course, it is those coins that are in extremely good condition that catch the eyes of collectors first and foremost.

What You Will Pay for a Standing Liberty Quarter

The asking price of a Standing Liberty is dependent on a whole host of different factors. As is typically the case for older coins, the first thing a collector will look at is the condition which the coin is in. If the piece has been excellently preserved, than it is almost a guarantee that the asking price will supersede that of a similar coin in worse condition. Apart from that, collectors must take into consideration the type of coin that they are looking to buy. Up to three different types of Standing Liberties were minted each year, and in some cases different coin types from the same year can boast drastically different values.

In addition to those two important factors, you must also take into consideration overly rare versions of the Standing Liberty. Some versions of this coin, for one reason or another, have become extremely difficult to find over the years, and if you do find them today you can bet that the price will be exorbitant. In some cases, Standing Liberties that are in absolutely horrid shape will sell for thousands of dollars simply because they are extremely difficult to find.

The Most Sought After Standing Liberty Quarters

Apart from those coins that are in excellent condition, the other most sought after versions of the Standing Liberty are those with rare dates and mintmarks. The “S” mintmark, for example is one of the rarest and also one of the coins that collectors will do almost anything to get their hands on.

The future value of a specific coin is not so easy to determine because anything can happen between the present and the future to alter the value of these coins. Generally, however, you will notice that as time passes these coins will only become more valuable. As collectors purchase them, leaving fewer and fewer on the market, the average price of a coin will shoot upward. This upward price movement will be even more dramatic for the coins that are already rare to begin with.

Being that these coins were minted for just about 15 years, there really aren’t all that many still around. Unlike coins that were minted for decades and decades, the Standing Liberty’s short period of time being minted was much shorter and as such these coins will be difficult to acquire.