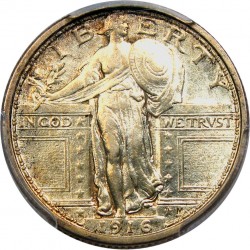 The 1916 Standing Liberty Quarters had a mintage of just 52,000 coins, as the design was only finalized near the end of that year after several adjustments. The Standing Liberty Quarter series began in 1916 and continued through 1930, the coins were struck at three different mints: Philadelphia (no mintmark), San Francisco (S) and Denver (D).The mintmark is found just to the left of the date.

For coins as old as the 1916 Quarter, collectors are always going to first concern themselves with the condition of the coin. Being that these pieces have had ample time to accumulate damage and wear, it should come as no surprise that many are in less than ideal condition.

If you are a die-hard collector, your best option would be to send your coins away for grading by a professional company, but this is not always an option. Understanding that not everyone has the time and money to have their coins graded, we have provided below an outline of the characteristics associated with the different coin grades.

Uncirculated: A coin that is graded as being Uncirculated is one that never spent any time on the open exchange market. These coins have been extremely well-preserved and appear as though they were minted just recently, not many decades ago. For collectors, it is always preferred that their coins are of this grade, but that is not always a realizable goal.

Extremely Fine: If a coin is graded as being Extremely Fine, this means that it was circulated for only a very short period of time. During its time in circulation, these coins will have incurred only a very little bit of damage that can be seen only under close inspection. Collectors also jump at the opportunity to purchase these coins as they look extremely nice.

Fine: For coins that are graded as being Fine, this means that the piece was circulated for quite a long time but did not have the chance to be overly damaged. You will undoubtedly notice some consistent scratching and surface wear, yet, the overall texture of the coin will have been preserved, as will have the imagery.

Very Good: Very Good is a grade given to coins that are heavily damaged, but not so much so that their imagery is unable to be seen. Through being circulated for decades at a time, these coins have had ample opportunity to be heavily damaged. Still, with how new these coins are (relatively speaking) it is not surprising that there are so many in great condition.