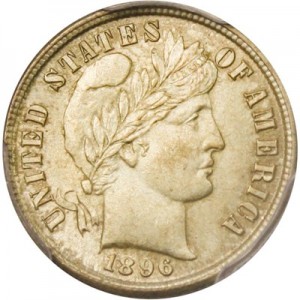 The Barber coinage consisted of dime, quarters and half-dollars. These coins were designed by United States Mint chief engraver Charles Barber and the dimes were minted from 1892 to 1916. Barber dimes are composed of 90 percent silver and 10 percent copper. By the late 1880s, there were increasing calls for the replacement of the Seated Liberty design. Mint director Edward Leech ordered a competition to come up with a new design for the coinage. Invited artists, however, did not participate in the contest because only the winner would walk away with a cash prize. Other submissions from the public also proved to be unsuitable. Leech therefore turned to Barber, his chief engraver, to come up with the new designs.

Once Barber secured Leech’s approval on the designs, they were sent to President Benjamin Harrison who approved the design in November 1891. The coin’s design has been the subject of mixed reviews from both artists and the public.

Barber dime values can vary significantly based on their mint year and mint location as well as their overall condition. To illustrate this, an 1892 Barber Dime in good condition may be worth less than $5.00 while an 1895-O Barber Dime may trade for over $1600 in extremely fine condition.

If you have a Barber Dime that appears to be in good condition and is from a sought-after mint year, you may want to consider sending it in to a professional coin grading service such as PCGS or NGC.

By having your coin graded by a professional numismatist, you may get a much closer idea of the coin’s potential market value. The grading process is very rigid and can account for even the most seemingly minor imperfections or wear and tear. In addition, by having your Barber Dime graded, you can rest assured that your coin is authentic and contains the stated silver content.

Because a coin’s condition can have such a drastic effect on its value, you will want to closely examine your coin. There are some simple methods you can use as a point of comparison. Start by picking a particular detail on the coin such as the wreath on the Liberty Head. If the wreath has been eroded and feels smooth to the touch, the coin may be considered to be in good condition. If the wreath has maintained some texture but still has noticeable signs of wear and erosion, the coin might be considered to be in fine condition. If the wreath remains robust with a solid texture and no signs of wear or discoloration, then your coin may potentially be in extremely fine condition. Of course, you will want to compare all other details on the coin as well such as the date, mint mark and other imagery.

Doing so can be well worth it, however, as the better the condition of the coin the more potentially valuable it may be.

Money May be in the Mint Mark

Barber dime values are based on several factors, with the minting location being a primary one. The coin’s mint mark can be found on the reverse under the wreath. Using mint year 1909 as an example, the Barber Dime you want to find is the 1909-S minted in San Francisco. These dimes can be valued at $4.63 if in good condition while one in extremely fine condition may fetch $135.

Why Barber Dime Values Are On the Rise

Barber dimes are sought after for several reasons. While prices can and do fluctuate, these silver coins may see increasing price appreciation in the coming years as the coins age. In addition, these coins were only minted for a relatively short period of time and their silver content also adds to their attractiveness.