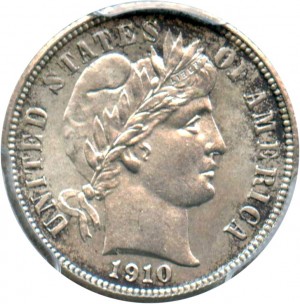 The Barber Dime is one of the most popular coins ever produced by the US Mint. These coins were made during the late 19th & early parts of the 20th century and were utilized by US citizens more than most other coins being circulated at the time. These coins are relevant today because collectors are constantly looking to add them to their collection.

The interesting aspect of the Barber Dime coin series is that with each new, annual release came two, three or four different types of Dime. This simple fact makes collecting these coins extremely difficult. Add the fact that not many of these coins have survived the years in great condition, and you have a large amount of collectors looking to acquire a relatively small number of coins.

Under normal circumstances, judging the condition of a coin is something reserved for coin grading companies. Because we do not all have the luxury of sending our coins away for grading, you can refer to the specifications below to gain a good idea as to what qualities coins of a specific grade possess.

Uncirculated: Coins of this grade are great because, after they were minted, they were immediately kept in a safe place and preserved. Because of this, they will show no signs of wear and their faces will be complete with all of the imagery and inscriptions intact. This gives the coin a texture not often found on pieces this aged.

Extremely Fine: A coin given the grade of Extremely Fine will show some signs of wear because it was circulated for a small period of time. Apart from some extremely light scratching, however, these coins will appear to be mostly pristine. Even some of the mint’s original luster will be able to be seen on the both sides of the coin.

Fine: This is a grade given to coins that saw a good amount of time in circulation and were on the receiving end of a lot of wear as a result. The faces of coins given this grade will be worn down to the point that they are smooth.

Good: If you have a Barber Dime that is in this condition, you have yourself a piece that saw a lot of time in circulation. Because of this extended period of time exchanging hands, these coins will show a lot of wear, including scratching, chipping, and just about anything else.

Giving the 1910 Barber Dime an accurate valuation is no more difficult than figuring out the type of coin and condition it is in. Because each type carries its own scarcity and level of demand, this is the first factor affecting the price of your coin. Secondly, it is condition that most readily affects what you will pay for one of these pieces. By referring to chart below, you will garner a better idea as to what you can expect to pay for a Barber Dime, given its type and grade.