Introduced in 2017, the American Western Skulls Collection of silver rounds debuted with six designs through late 2017 and into 2018 with deadly designs of famous characters from the American Wild West. An era of expansion and lawlessness, the Wild West period in America’s history stretched from the 1820s through 1910. The most explosive periods of Wild West expansion in the US came in the decades before and after the US Civil War. The American Western Skulls Collection initially focused on the outlaws, indigenous figures, and lawmen that clashed with each other on the frontiers. Now, there’s a seventh design available in this popular silver round series that depicts a unique character. 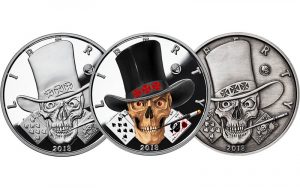 The Gambler Round Design

For the latest release, the American Western Skulls Collection depicts the image of a Gambler. On the obverse side of the new American Western Skulls Gambler Silver Rounds is the skeletal figure of a Wild West gambler. This individual wears a tall top hat that has three flowers on it and has a wide-eyed look. Instead of weapons crossed at the bottom like all previous designs, this unique issue has four cards. The included cards come from the famed aces-and-eights hand in poker. You’ll notice the ace of clubs, ace of spades, eight of clubs, and eight of spades. This is known as the Dead man’s hand in poker.

As with all other releases in the American Western Skulls Collection, this silver for sale features the fried eagle design on the reverse. In keeping with the theme of death captured in this series, the fried eagle is a twist on the heraldic eagle of the United States. The heraldic shield of the nation rests in front of the bird while it clutches arrows in one talon and an olive branch in the other. Above its head is a triangular cluster of 13 stars representing the original colonies of the United States. Rather than a robust, powerful eagle behind the shield though, you’ll find a dead bird with no feathers. The design is a dark take on the inevitable fall of all powerful things.

The new Gambler Silver Rounds are available in the same 1 oz and 5 oz silver round options as the previous releases. The mintage figures for each weight and version include:

Each individual round is housed inside of a protective plastic capsule and features its own edge-lettered serial number. The rounds ship with a Certificate of Authenticity that has a printed serial number matching the one from the edge of the round. The proof version of the round has frosted design elements with mirrored background fields. Antique rounds in the series feature rough, rustic visuals. The colorized proof rounds feature layers of colorized lacquer that give the design a life-like appeal. The Gambler’s top hat is black in this design with red flowers and the cards in the Dead man’s hand feature the proper colors of their suit.

About Gambling in the American Wild West

The very idea of moving west of the Mississippi River in the 1820s was a gamble. Americans who wanted a new life or more land found the East Coast and the established states from the original colonies not suitable. However, moving west wasn’t as simple as grabbing a piece of land and putting down roots. The American West was already inhabited by indigenous tribes. In addition to the threat of those already living in the west, settlers had to face the constant threat of outlaws and the fact that success in the west was not guaranteed. For example, many people moving west went in search of gold and silver. The wealth these precious metals promised was realized by a precious few, leaving most in financial ruin.

The decision to move west during the 19th century was, itself, a gamble. With few options for entertainment and recreation, many early settlers took up gambling as a means to pass the time when they weren’t working. Gambling tables were found in almost every bar, saloon, and brothel throughout the west. Lawmen, gunfighters, and Average Joes all tried their luck at the tables. For some, there was no luck to be found. For example, the Dead man’s hand featured in the design of the Gambler Silver Round comes from the rumors surrounding the death of famed gunfighter Wild Bill Hickok.

Enjoying a drink and a game of cards in Deadwood in the Dakota Territory at Nuttal & Mann’s Saloon, Hickok was shot in the back of the hand by Jack McCall on August 1, 1876. Hickok was famous for his gambling luck and was known to prefer sitting in the corner of a room so he could always see the door. On this fateful day though, this gambler was sitting with his back to the door, allowing McCall to get the jump on him. Rumored to be in his hands at the time were the aces-and-eights of the black suits from the deck.

The American Western Skulls Collection Gambler Silver Round is currently available to purchase from JM Bullion. All six versions in this exciting release are yours to choose from, so don’t hesitate to act. If you need help, call us at 800-276-6508, chat with us online, or send us an email. Stay tuned to our blog each Friday for new updates and don’t forget to follow us on Facebook as well.