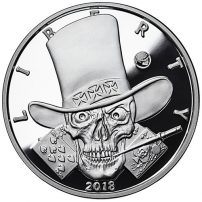 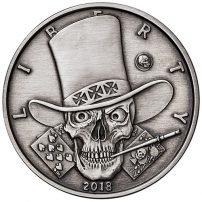 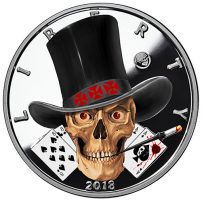 Double Down on American Western Skulls with the Gambler Design

The American Western Skulls Collection debuted in 2017 with silver round designs reflecting some of the most common characters from popular culture surrounding the Wild West. Included in the original design were largely figures of law and order: sheriffs, US Army cavalry, and Native American warriors. For the latest release of the series, a unique character ubiquitous in the Wild West is featured in the form of the Gambler. Learn all about the seventh release in this exciting collectible series!

Are You Feeling Lucky? The Gambler Design

The American Western Skulls Collection offers collectors buying silver the chance to “test their fate” on the cards like the Gambler. This new silver round in the series is the seventh release and includes the design of a different character than the previous releases. Gambler Silver Rounds feature the skeletal figure of a Gambler with wide eyes and a tall top hat. The Gambler isn’t featured with weapons like other characters in the series, but rather, a hand of four cards with the aces and eights showing. Known as the Dead man’s hand, the aces and eights feature two aces and two eights in a hand of poker.

A focal point of the design in the Gambler Silver Round is the Dead man’s hand. Featuring the eight of clubs, eight of spades, the ace of spades, and ace of clubs, the hand of all black aces-and-eights is so-called the Dead man’s hand because it was rumored to be in the hands of famous gunfighter Wild Bill Hickok. Wild Bill was a well-known gambler and gunfighter throughout the west and he was rumored to never sit at a gambling table in a bar or saloon with his back to the door, fearing retribution from other gunfighters or sore-loser gamblers. On one fateful day in Deadwood, Dakota Territory in August 1876, Hickok was forced to sit with his back to the table. As the cards came out, Hickok was dealt the aces and eights of the black suits when Jack McCall came in and shot Hickock in the back of the head.

Gamblers in the Wild West

The Wild West was full of gambling halls and tables at saloons, bars, and even brothels. Gambling was a popular recreational activity for those moving west. With little else to fill their downtime, countless men used what little extra cash they had to pass the time gambling. Gunfighters, outlaws, and even lawmen were common fixtures at the gambling tables. It was not uncommon for gunfights to breakout as a result of a hand of cards based on accusations of cheating or card counting. Whatever the case, gambling was popular in the west!

In fact, many of the most notable gunfighters of the west were the best gamblers. Wild Bill Hickok was just one of many famous gunfighters to consistently test his luck in a game of cards. Average Joes weren’t afraid of gambling at the tables either, and there were also famous women gamblers. Eleanore Dumont was a popular gambler and ran houses in Nevada, Idaho, Montana, and South Dakota. Alice Ives was so good and well known she eventually just went by the name Poker Alice.

As with the other releases in the American Western Skulls Collection, the Gambler Silver Round features six options for silver buyers to choose from when shopping. The 1 oz silver rounds and 5 oz silver rounds are available in proof, antique, and colorized proof finishes. The proof rounds have matte design elements and mirrored backgrounds, with antique rounds featuring a rough, matte finish and the visual appeal of ancient coinage. The colorized proof rounds depict the Gambler with a black top hat and three red flowers on it, as well as the appropriate colors for the cards and their suit featured in the Dead man’s hand.

Each round in the American Western Skulls Collection has a unique serial number etched onto the edge, ships inside of a protective plastic capsule, and comes with a numbered Certificate of Authenticity matching the serial number on the round.

If you feel as though Lady Luck is on your side, try your hand with the Gambler Silver Round. All American Western Skulls Collection silver rounds are available to purchase from JM Bullion. If you need any assistance, don’t hesitate to contact our customer service team at 800-276-6508. You can also connect with us live online through our web chat and email address features.