From 2016 to 2021, the Royal Mint dazzled Royal Family enthusiasts, historians, and coin collectors with a series of 10 designs honoring the history of the monarchy in England. This distinctive collection focused on the heraldic beasts that have long been associated with the Royal Arms of England, the official emblem of the monarchy. Over the course of hundreds of years, various monarchs and prominent houses to control the throne have been represented in the Royal Arms by different heraldic beasts. While the Royal Mint issued individual designs for each of the 10 heraldic beasts, the series reaches its ultimate conclusion with the release of new Queen’s Beast Series coins known as the Queen’s Beast Collection. 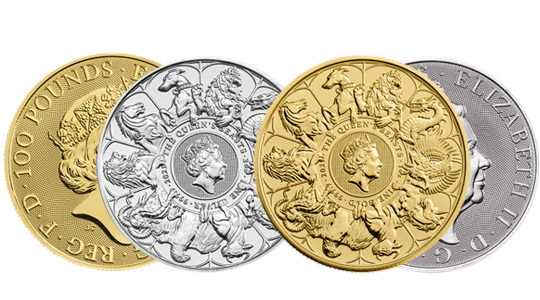 While the individual releases throughout the Queen’s Beast Series featured 10 distinct designs, the new coins in the Queen’s Beast Collection release all share a common design. On coins such as the 2021 1 oz British Gold Queen’s Beast Collection Coin, the Royal Mint offers an effigy of Her Majesty, Queen Elizabeth II, in the center of the design with the 10 heraldic beasts from her 1953 coronation surrounding the portrait. The portrait at the center is the current fifth-generation design from the mint. Around the Queen, the Lion of England, Red Dragon of Wales, Griffin of Edward III, White Unicorn of Scotland, Black Bull of Clarence, Falcon of the Plantagenets, Yale of Beaufort, White Lion of Mortimer, White Horse of Hanover, and the White Greyhound of Richmond all encircle the Queen.

For the obverse side of the 2021 Queen’s Beast Collection silver and gold bullion coins, the Royal Mint features the beautiful effigy of Her Majesty from Jody Clark. Created in July 2015 by Mr. Clark, this portrait of the Queen shows the monarch wearing the George IV State Diadem Crown on her head. In this design, the Queen is shown at the age of 89. The background field bears the Royal Mint’s currently guilloche design element.

In the release of the 2021 Queen’s Beast Collection Coins, the Royal Mint offers three major options. These include a 1 oz gold bullion coin, a 2 oz silver bullion coin, and an impressive 1 kilo silver coin. Each coin is available in Brilliant Uncirculated condition and can be purchased individually or in bulk. The details for each coin are as follows:

History of the 10 Heraldic Beasts

Each one of the heraldic beasts featured in the Queen’s Beast Series has its own, long history within the monarchy of England. From the Plantagenets that ruled the kingdom for more than 300 years during the Middle Ages to the House of Hanover in the 18th and 19th centuries, the 10 beasts depicted in the series represent a history of the crown that starts with the first official Royal Arms in 1198 during the reign of King Richard I, better known as Richard the Lionheart. Two of the beasts in this series remain in the Royal Arms of England carried in the 21st century by Her Majesty, Queen Elizabeth II. When a young Queen Elizabeth II entered Westminster Abbey in 1953 for her official coronation, wooden carvings of these 10 heraldic beasts flanked the doors to guard their Queen as she entered to become the monarch of England in a beautiful spectacle.

If you have any questions, please feel free to ask. JM Bullion customer service is available to you at 800-276-6508, online using our live chat, and via our email address. Don’t forget to follow us on Facebook and regularly check back with our blog to stay up to date on exciting new release.