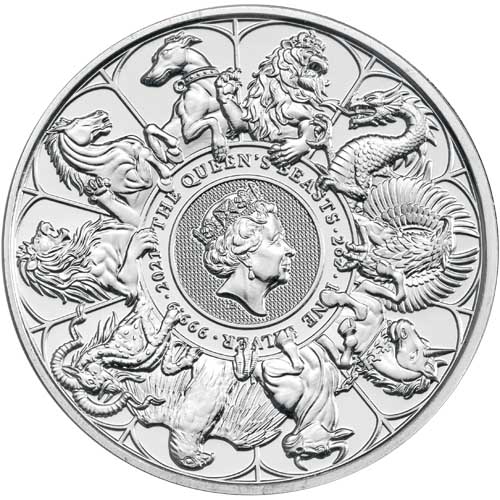 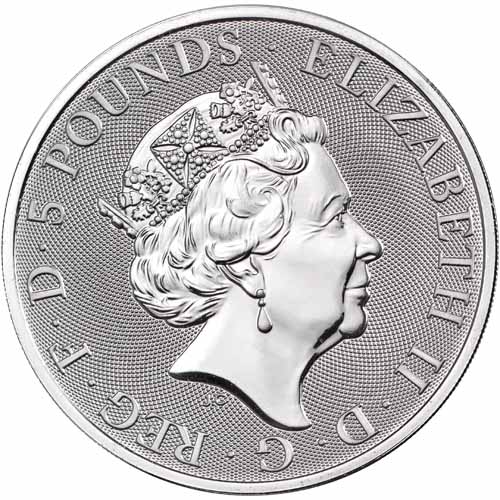 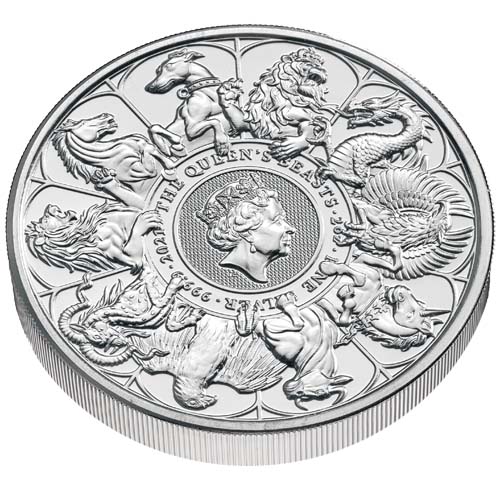 Each of the 2021 2 oz British Silver Queen’s Beast Collection Coins available here comes in Brilliant Uncirculated condition. The 2 oz silver coins in the Queen’s Beast Series are available individually in plastic flips or by multiples of 10 in acrylic tubes. Multiples of 200 arrive in a Monster Box containing 20 individual tubes.

The final release in the Queen’s Beast Series doesn’t feature a new heraldic beast, but rather, all 10 beasts introduced to collectors and investors from 2016 to 2021. The final piece in the series brings together all 10 of the Queen’s Beasts as passed down to her over the course of 1,000 years of history for the British monarchy. Each design in the series was created by Jody Clark, the same man who created the definitive fifth-generation portrait of the Queen that now graces British coins.

The obverse side of 2021 British Silver Queen’s Beast Collection Coins comes with the fifth-generation portrait of Queen Elizabeth II. Developed in 2015 by Jody Clark, this image showcases the Queen in right-profile relief with the George IV State Diadem Crown on her head. The effigy of the Queen is set against a guilloche background element that offers security against counterfeiting.

On the reverse field of the 2021 2 oz Silver Queen’s Beast Collection Coin, you will find the same portrait of the Queen shrunk in size to fit into a smaller portion of the coin’s central field. Around the effigy of the Queen, each one of the 10 heraldic beasts surrounds the Queen. From the Lion of England to the White Greyhound of Richmond, the beasts that have supported the Royal Arms of England over the last 1,000 years now surround the realm’s longest-reigning monarch.

If you have any questions about these silver coins for sale, please contact JM Bullion. Our team is available to you at 800-276-6508, online using our live chat, and through our email address.

Jennifer from - February 18, 2022
"WOW! What a fantastic way to wrap up The Royal Mint’s stellar “Queen’s Beast” series!! The design, the details, this coin is a “ must have” for every stacker and collector, especially for those of us who are Anglophiles, history buffs, and lovers of mythology!"

Stacy from OH - July 22, 2021
"I love all of the 2oz BU coins in this series but this is a fantastic addition with all 10 Beasts! Very nice details, highly recommend!!"