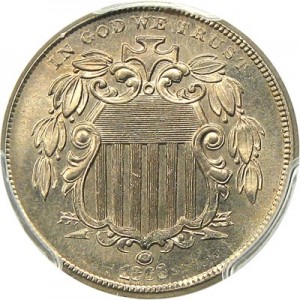 The United States Mint can trace its history back to the early days of the United States itself. After the country was founded, the US government realized the need for unique coinage, and by 1793 the first US Mint building in Philadelphia, Pennsylvania was erected. This first facility was tasked with producing all of the country’s coinage, but before long was operating at full capacity, forcing there to be more mint facilities created.

During the early years, the US Mint created coinage utilizing coin blanks from other parts of the world, but that practice was inevitably done away with. Having been in existence for more than 200 years, the US Mint has produced many coins that are nowadays highly valued in the eyes of collectors. One of those coins is known as the Shield Nickel, and is a 5-cent coin that was produced through the middle parts of the 19th century. The Shield Nickel is just one of many five-cent pieces produced by the US Mint, but is especially renowned simply because of the time period during which it was minted.

When the Shield Nickel was conceived in 1866, five-cent pieces had been produced by the US Mint since 1792. Originally, these coins were known as half dimes and were made of silver. At the time, silver half dimes were comprised of more than 89% pure silver while the rest of the coin was made of copper.

By the time the Civil War broke out in the United States in 1861, the US Mint was forced to cease production of US coinage. During the more than 4 years during which the Civil War raged, people were forced to pay for goods by way of any number of negotiable tools, including stamps and tokens. In 1864, Congress began the process of putting coins back into circulation and made its first move to abolish the three-cent piece and instead replace it with bronze cent and two-cent coins. Also in 1864, Congress authorized the creation of a new five-cent piece. The new half dime was to bear the image of William Clark, famous explorer, but somewhere along the line that message got confused and the coin, when unveiled to Congress, bore the image of Currency Bureau head Spencer Clark.

Mint Director of the time James Pollock was initially opposed to utilizing a coin made of nickel, but after he took into consideration the success of the nickel three-cent piece, he quickly changed his mind. Joseph Wharton, who played a major role in the nickel industry of the day, is also credited with helping put into action the creation of a nickel-based 5-cent piece. When the nickel 5-cent piece was initially proposed, it was said to weigh about 3.9 grams, but the House of Representatives upped that weight to an even 5 grams. By the middle of May 1866, a bill was passed by Congress that sanctioned the creation of the new, heavier five-cent piece.

After the Bill that sanctioned the creation of the Nickel was passed in 1866, Chief Engraver of the US Mint, James Longacre, was forced to draft a design for the coin as quickly as possible. Because of his limited time, Longacre decided to make the design of the new five-cent piece resemble that of the already circulating two-cent piece of the day. The design used for the Shield Nickel was altered slightly as to not appear identical to the two-cent coin’s design.

Though more elaborate designs were thought up by Longacre, Treasury Secretary Hugh McCullough decided that the shield design was most suitable for the obverse, while the reverse boasted a simpler design featuring the five-cent face value and what appeared to be sun rays.

Though simple in design, the Shield Nickel is said to boast one of the most Patriotic designs of all US coinage. The Shield is nothing more than a derivative of the Great Seal of the United States, and focuses on the Shield as a representation of strength through unity. The arrows crossed behind the Shield are said to not represent aggression, but rather a willingness to defend. Finally, the laurel branches you see are said to be an ancient Greek symbol of victory.

As soon as the Shield Nickels were first being produced by the US Mint, it quickly became realized that it was not going to be a simple process. The copper planchets used to make the coins were tougher than what the mint was accustomed to, and as such, the coin’s dies were short-lived. The coin’s design, while viewed in high regard today, was highly criticized during the coin’s time in circulation. These criticisms very well might explain why the Shield Nickel was in circulation for less than 20 years.

The design of the Shield Nickel, though criticized during its time in production, is now one of the things that makes the coin so incredibly sought after by collectors. Being that fewer than 20 editions of the Shield Nickel were produced, the prospect of collecting an entire, complete set of Shield Nickels is not such a daunting one.

Finally, Shield Nickels may be well over 100 years old, but they are still able to be found in excellent condition. The reality of the matter is that there were plenty of Shield Nickels that have been preserved over the years. As you might have guessed, however, these well-preserved pieces are also the ones that sell for the highest prices nowadays.