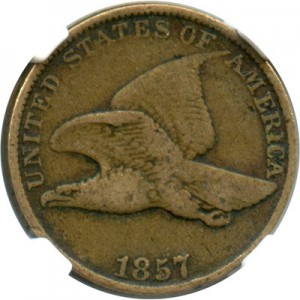 The US Mint has been around nearly as long as the United States itself, and is now not only tasked with producing coinage for the United States, but coinage for many other countries around the world as well. Sanctioned by an Act of Congress, the first US Mint facility was founded in Philadelphia in 1792. Shortly thereafter, the US Mint was forced to expand as settlers ventured further and further westward. This expansion brought about the creation of 4 additional US Mint facilities located in San Francisco, California; Fort Knox, Kentucky; West Point, New York; and Denver, Colorado.

The US mint has produced many coins that have since become hot collector’s items, but few coins are more iconic than the Flying Eagle Penny. This interesting coin was only minted for a short period of time, but is now an extremely popular piece amongst collectors simply because of the story behind it.

Having been produced just prior to the outbreak of the American Civil War, these coins are also viewed as an interesting part of United States history. In the following few sections, the Flying Eagle Penny will be broken apart and elaborated upon so that you can gain a better understanding of just why exactly these single-cent coins are so popular.

The single cent coin, later known as a penny, was one of the first coins ever produced by the US Mint in 1793. At the time, these coins look nothing like the pennies we know today because they were roughly the size of a US Half-Dollar coin. For this reason, it is easy to understand why they are often referred to as “large cents.”

In the early years, pennies were made of pure copper, but by the mid-1800s, pure copper coins became too expensive to produce, so the US Mint started making smaller pennies that had copper and a little bit of another type of metal, such as silver. An interesting note is that, at that time, only gold and silver were accepted metals to be used in official legal tender, so there was a lot of opposition to the establishment of a penny coin as legal tender.

Just prior to 1856, the US Mint’s director, James Snowden, proposed a plan to begin producing a much smaller penny. Finally, and after much debate, these coins were authorized to be legal tender by both the House and the Senate. At the same time, foreign gold and silver coins—of which most people utilized for purchases and the repayment of debts—were deemed to no longer be acceptable forms of legal tender in the United States. Flying Eagle Pennies were then finally produced in April of 1857, and set into circulation barely one month later.

The design of the Flying Eagle Penny was the idea of the US Mint’s chief engraver Jame Longacre, but is a design that was not all too unfamiliar. Based on of the design of the Gobrecht Dollar (circulated between 1836 and 1839), the obverse side of the Flying Eagle Penny depicts an American Bald Eagle midflight. Legend holds that Gobrecht derived his original design from an eagle named Peter, which was apparently unusually tame and said to be fed by US Mint workers throughout the 1830s until it got entangled in Mint machinery and killed itself.

Even though Longacre did not necessarily come up with the design on his own, it is still widely revered by collectors and coin experts the world over. Other than the flying eagle on the coin’s obverse, the Flying Eagle Penny is a fairly plain coin. Accompanying the eagle on the obverse side is an inscriptions which reads “United States of America.” The year in which the coin was minted is also listed on the obverse side.

The design of the coin’s reverse is also quite simplistic and features the one-cent face value within a rather ornate-looking wreath. A reeded texture outlines both faces of the coin, but other than that the coins are generally simplistic in their design.

The Flying Eagle design quickly encountered problems within its production process, so the coin was quickly discontinued and replaced by the Indian Head Penny. Seeing as these coins were only in circulation for an incredibly short period of time, it is easy to see why they are so popular in the eyes of collectors. For one, there is a very finite supply of these coins still around, and of the coins still existing most of them are in fairly rough shape.

The design of the coin itself is another draw for collectors. It is held by many that the Flying Eagle Penny was the first coin to ever depict a bird in flight. Most often, the birds you found on coins from around the world were taken from some sort of historic shield or crest. Many credit the Flying Eagle Penny as beginning a trend where coins depict animals in their natural habitat rather than in some unrealistic, regal pose.

All in all, the Flying Eagle Penny is by no means easy to get ahold of. These coins are extremely rare and even rarer to be found in extremely well-preserved condition. You have to understand that, because of their low face value, pennies were used to pay for a wide variety of goods and services. Finally, the general intrigue surrounding these coins makes them irresistible to anyone who is looking to put together a nice collection of US coins. While it is relatively common to find a collection full of Indian Head Pennies, it is extremely rare to find one boasting a Flying Eagle Penny.