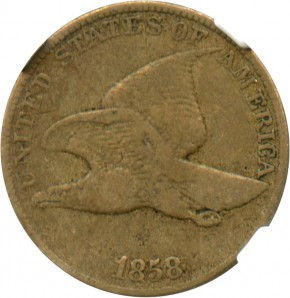 Flying Eagle Cents were minted from 1856 through 1858. The Flying Eagle Cent was the first small cent to be minted in the U.S., replacing the more expensive Large Cents of the past.

The 1858 Flying Eagle illustrates an Eagle in flight on the obverse and the reverse features the words “ONE CENT” inside a wreath. The 1858 Flying Eagle cents were issued in huge numbers for circulation before this type was quickly retired. All three dates are rather popular with numismatists, and this brief series traditionally has been collected as a prefix to the Indian Head Cents that followed.

Uncirculated: An Uncirculated coin is one that never exchanged hands and was never used to pay for goods or debts. The coin itself will have retained most of its original shine, though some of it will have faded through the years. The coin’s overall texture remains perfectly intact such that every image and inscription can be made out without any trouble.

Extremely Fine: An Extremely Fine 1858 Flying Eagle will show some signs of wear, but overall will look mostly pristine. The coin’s shine will have faded somewhat, but all in all the coin itself is incredibly attractive and looks great for being more than 100 years old.

Fine: A Flying Eagle deserving of a Fine grade will show a good amount of wear, but will have retained most of its imagery and texture. While some of the inscriptions will have been worn down, the coin itself is still in decent shape. The coin’s eagle may be quite dull, this is due to the thousands of times the coin has changed hands.

Good: An 1858 Flying Eagle coin will be in fairly rough shape. The coin will have significant signs of wear and tear, including scratching, wearing down of the raised imagery, and other blemishes. The coin itself will have lost much of its shine through many years of circulation.

To determine an accurate price for an 1858 Flying Eagle, you must look no further than the condition the coin is in. Naturally, the better the condition, the higher the price will be, and this coin is no exception to that. By using the chart below, you can determine the value of an Flying Eagle if you are given its condition and grade.