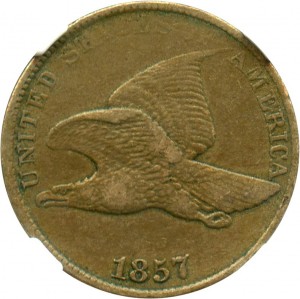 In 1857 we bid farewell to bulky large cents, and welcomed smaller one cent pieces. Actually, the limited number of Flying Eagle pennies that were made in 1856 served as patterns and weren’t authorized as an official U.S. Mint issue. As the first issue of small cents for circulation, the 1857 Flying Eagle Cents were coined in huge numbers for the period.

Since this was a new design, as stated above, the Mint produced record numbers of the Flying Eagle Cents. The Flying Eagle is the first cent with over 10 million coins minted. Due to much interest from collectors and the public, large amounts were saved, which makes this coin somewhat easy to find today.

Extremely Fine: An Extremely Fine Flying Eagle is one that saw only a very limited amount of time in circulation. These coins are in great condition and will show but only a few small signs of wear. Apart from light scratching or other small imperfections, these coins are aesthetically pleasing.

Fine: For coins that saw a good amount of time in circulation but did not get destroyed during the process, Fine is an appropriate grade. While the amount of scratching present on the coin’s faces will take away from the coin’s appearance, you will find that all the major facets of the coin are intact. For being so heavily used, these coins are in great shape overall.

Good: This is the grade given to coins that saw an extremely long time in circulation. Because of the years they spent changing hands, 1857 Flying Eagle deserving of this grade will be scratched, chipped, and generally just beaten up. On some occasions, these coins will even be bent or chipped.

In order to give these coins a price, look no further than the grade the coin was given. Collectors will always look at the condition of the coin first, and if it is in especially good shape the investor in questions will have no qualms spending a good amount of money on the coin. By way of the chart below, you can gain a good idea of what graded 1857 Flying Eagle will cost you on the open market.