Over the course of the last four-plus decades, there have been several landmark developments in the video game industry. From the release of the first major in-home console with Atari to the rise of player-vs-player games and the 21st-century dominance of online, multiplayer gaming, the video game industry has seen several watershed moments. Few franchises have proved as consistently popular as Street Fighter. A new collection of colorized Fiji silver coins delivers four depictions of the major characters from the 1991 debut of Street Fighter II: World Warrior. 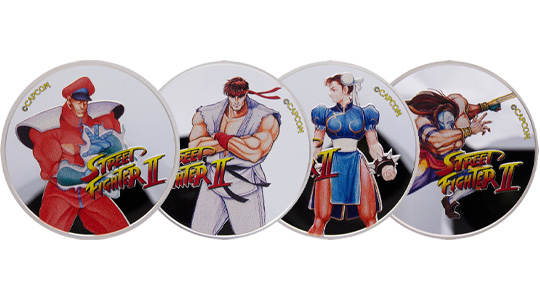 The new Street Fighter II colorized series from Fiji includes a total of four individual silver coins. Each coin has the same obverse design on a 1 oz silver blank. The reverse field of each coin has the image of a different playable character from the video game franchise that is captured in the accurate colors those characters wore in the games. These 2021-dated coins include the following designs:

All of the coins in the Street Fighter II Colorized Silver Series feature the same obverse design. The national coat of arms for Fiji is found on the obverse of each coin. The design includes the quartered shield with native Fijian figures supporting it on either side. It is topped by a Polynesian outrigger canoe and includes inscriptions of the identifying hallmarks of the coin.

Each coin in the Street Fighter II Colorized Series comes with an individual acrylic capsule from the mint. Each individual design is limited to a total mintage of only 5,000 coins. The coins have 1 Troy oz of .999 pure silver and bear a face value of $.50 backed by the Reserve Bank of Fiji. In addition to the colorized characters on the reverse, the stylized logo for Street Fighter II and the Capcom logo both feature on the reverse of the coins with a colorized finish.

Street Fighter II celebrates its 30th anniversary in 2021. Released in 1991, it was the second game in the Street Fighter franchise and was an important step forward for the series. It introduced a variety of new features to the game, such as command-based moves, a combo system, a new six-button configuration, and more characters for players to use. As of 2017, Street Fighter II remained one of the highest-grossing video games of all time with total revenue of $10 billion.

Collect Them All in the Colorized Street Fighter II Series

With limited mintages, these coins won’t last forever. If you’re a fan of the Street Fighter franchise or know someone who is, these coins would make the perfect gift. Please contact JM Bullion with your questions at 800-276-6508, chat with us live online, or simply send us an email. Don’t forget you can follow us on Facebook and check our weekly blog posts for more details on upcoming and new series.