The United States Mint made big waves in the fall of 2019 when it announced that the reverse designs of the American Silver Eagle and American Gold Eagle coins would be replaced in 2021 for the 35th anniversary of the series. The process of selecting new designs has been ongoing since then. The Citizens Coinage Advisory Committee convened for a meeting on June 23, 2020, to consider a wide array of proposed designs for the reverse of both coins. In total, the CCAC had 39 reverse images to consider for both the Silver Eagle and Gold Eagle, respectively. Each set of 39 designs were unique to the various coins. After that meeting, the CCAC whittled the list all the way down to one design recommendation for each coin. 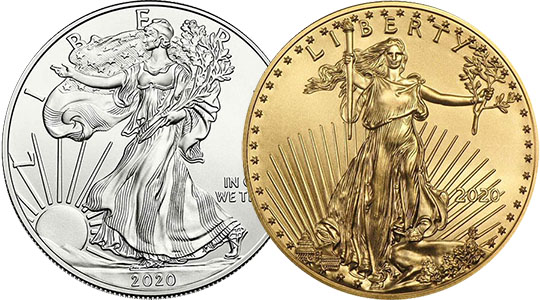 After its June 23rd meeting, the CCAC recommended a radical new design for the reverse of the American Silver Eagle. From the broad list of possible designs, the CCAC selected an image that features a realistic American bald eagle’s head. The eagle’s head is shown in left-profile relief with its sharp, hooded beak and powerful gaze included in the design. The artwork for this potential new Silver Eagle includes more realism than the current design with the feathers of the bird captured in greater detail. Inscriptions include “United States of America” along the top rocker and “E Pluribus Unum” right below it. On either side of the eagle’s head there are three stars in the design rocker. The bottom of the coin’s design rocker includes inscriptions of “1 Dollar” and “1 oz. Fine Silver.”

At that same meeting in June, the CCAC narrowed down its vision for the American Gold Eagle to a new reverse design. Again focusing on a realistic depiction of the American bald eagle, the design chosen by the CCAC removes the family imagery in favor of just one bird. The design proposed by the CCAC features a bald eagle soaring in flight over the rising sun. The bird’s feathers are captured in great detail as its wings are spread out to its fullest. An artistic version of the sun is in the lower-right field of the coin. Inscriptions on this side read “United States of America” and “1 oz. Fine Gold – In God We Trust” along the design rockers. Within the design field, you will find “E Pluribus Unum” and “$50” above the head of the bird.

Selection Down to 2 Options Each – US Commission of Fine Arts

The selection process is not complete just yet. The CCAC has submitted its final choices for the new reverse designs, but so too has the United States Commission on Fine Arts. The commission recommended two separate reverse designs from the list of 39 for each of the coins. The designs chosen by the commission include:

The CCAC and What’s Next

The Citizens Coinage Advisory Committee is a congressionally mandated public committee that advises the US Secretary of the Treasury on matters of coinage designs and themes. The committee consists of 11 members and its June 23rd meeting included the participation of United States Mint Director David J. Ryder in the proceedings. With the CCAC’s recommendations for the new Silver Eagle and Gold Eagle designs selected, those designs and the two designs from the US Commission on Fine Arts will now be sent to Steven Mnuchin, the current US Secretary of the Treasury. Mr. Mnuchin will select the final design for each coin from the two respective designs for each program.

2020 American Silver Eagle and American Gold Eagle BU coins are the final releases that will feature the current designs in use since 1986. Both coins are still available in our In Stock Bullion, but with prices on the move and demand increasing, now might be the time to strike. If you need help buying bullion, please contact JM Bullion. Our team is available at 800-276-6508, online using our live chat, and via our email address. You can also follow us on Facebook and read our weekly blog posts for more information.