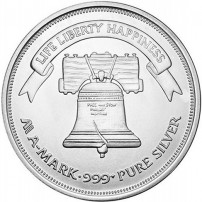 1 oz A-Mark Silver Round (New)
As Low As:
In Stock 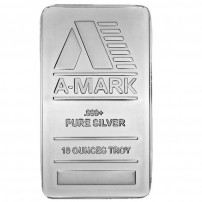 A-Mark is a full-service precious metals trading company based in Santa Monica, California. From humble beginnings in 1965, this American-based mint has grown to become one of the world’s largest distributors of gold, silver, platinum, and palladium bullion. It supplies blanks to some of the globe's most recognized national mints and distributes its own metal products to collectors and investors around the world.

The A-Mark company looks to make buying precious metal accessible for all investors and collectors, no matter what their circumstances, with financing, leasing, consignment, hedging, and a range of personalized financial programs. It is also proudly an all-American brand and one that paved the way for other local metal manufacturers.

The History of A-Mark

Steven C. Markoff created A-Mark Precious Metals in 1965, a small company which specialized in trading rare and collectible coins. In 1968, it expanded its interest and became the world’s first company to buy U.S. silver certificates which they would sell and trade for U.S. Government silver bars. A year later it became the first American company to import American gold from foreign nations.

During the 70s and 80s, A-Mark acquired a massive amount of rare gold and silver, including an enormous Silver Dollar collection of more than 400,000 coins. However, it knew that to reach its full potential it shouldn’t rely on acquiring metals made by others. In 1981, it minted its first, highly collectible one-ounce silver bar.

A-Mark experienced rapid growth when gold ownership became legal for all United States citizens at the end of 1974. In 1983, its fiscal year sales exceeded one billion dollars for the first time. In 2001, A-Mark created a New Issues and Collectibles division to market its established and proprietary collectibles, as well as expand its international reach. Following these successes, this marketable company became part of Greg Manning Auctions, Inc. in 2005.

The company began its business in bullion, but it has never been afraid to expand its scope. In 2006, it entered the numismatic coins market with the creation of CFC, a wholly owned subsidiary which exclusively finances the collectible coins for dealers and individuals.

In 2009, A-Mark Precious Metals expanded offshore with the launch of A-Mark Trading AG, an Austrian firm which promotes A-Mark’s goods and services throughout Europe.

Over the years, A-Mark has also served as the exclusive distributor of various key metal releases, including Banco de Mexico’s one-ounce silver Libertads in 1984, Union Bank of Switzerland’s Gold Kinebar in 1995, and Johnson Matthey’s 100-ounce silver bars in 2002.

What Type of Metals Do They Work With?

A-Mark Mint creates gold, silver, platinum, and palladium bullion. All A-Mark's metals are at least 0.916 fineness, and most have a superior 0.999 rating. It uses these superior metals to craft rounds, bars, wafers, and grain for its diverse range of customers on six continents. Its clients include investors, collectors, mines, jewelers, merchants, commodity brokerage houses, and coin and metal dealers.

The superior quality of A-Mark's precious metal products has been recognized by some of the world’s leading national mints. It supplies blanks to mints including the Royal Canadian Mint, the Australian Mint, and the South African Mint. A-Mark is also an authorized purchaser for the U.S. Mint.

A-Mark products do not have the advanced security features of some other mints, but all of its own bullion are stamped with the A-Mark name, the products weight, and the fineness of the metal used. This is not the case for the bullion A-Mark creates for other mints and makers, but the name of these companies helps to assure collectors and investors of their authenticity. In addition, the A-Mark bars are sold in plastic packaging to maintain their quality.

A-Mark's bullion is widely available due to the fact that it is produced on a regular basis. Their most popular products are made of silver and include the 1 oz A-Mark Liberty Bell Round and the 10 oz A-Mark Silver Bar. The cost of the mint’s products fluctuates according to the market, but they are usually available at competitive premiums to that of other mints.