Fans of the Star Wars franchise will find no shortage of gold and silver bullion coins available to add to their investment portfolio or coin collection. The New Zealand Mint is the leading producer of coins from the famed science-fiction franchise of feature films. The coin designs from the New Zealand Mint include images of main characters and minor figures alike, but all coins have beautiful finishes, exhibit attention to detail in design, and feature pure gold or silver content. The Clone Trooper design is the latest entry in the Star Wars Collection from the New Zealand Mint and is now available to you online from JM Bullion. 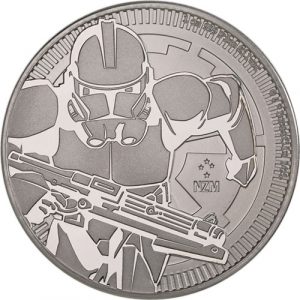 The obverse face of 2019 Niue Clone Trooper Silver Coins include a portrait of Queen Elizabeth II. Her Majesty is featured here in right-profile relief in the fourth-generation design that originated from the Royal Mint of England. Designed in 1998 by Ian Rank-Broadley, this image depicts the Queen in a regal, elegant effigy. Engravings on this side of the coin include Her Majesty’s name, the date of issue, nation of issue, and the face value of the coin.

The 2019 1 oz Niue Clone Trooper Silver Coin is available with a limited mintage from the New Zealand Mint. There are no more than 250,000 coins available in this release and the coins are brilliantly packaged for individual and bulk purchasing options. Individual coins are housed inside of protective plastic flips. Multiples of 25 coins are housed inside of mint tubes. The largest bulk option is a Monster Box of 250 coins housed in 10 tubes of 25. The Monster Box has a Star Wars theme with a New Zealand Mint strap on the box. Each coin features 1 Troy oz of .999 pure silver and is in Brilliant Uncirculated condition.

What is a Clone Trooper?

Clone troopers are fictional soldiers representing the Grand Army of the Republic in several films within the Star Wars franchise. The figures appeared in two feature films and one animated film in the collection. The debut of clone troopers came in the 2002 film Episode II: Attack of the Clones and later featured in the 2005 film Episode III: Revenge of the Sith. The clone troopers appeared in the prequel films within the franchise as genetically modified humans cloned from Jango Fett, the bounty hunter who captured Han Solo. Clone troopers fought for the Galactic Republic throughout the Clone Wars, hence the name of the troopers. When the Republic transformed into the Galactic Empire, the troopers were no longer referred to as clone troopers and went on to become known as Stormtroopers.

About the New Zealand Mint

Coins such as the 2019 1 oz Niue Clone Trooper Silver specimen are issued by the New Zealand Mint as part of its Star Wars Collections. The mint is a privately owned company located in the city of Auckland, New Zealand. The mint is the only privately owned mint in the country, and despite its name it does not operate as the official mint of the nation. The mint issues gold and silver bullion in various programs, with the Niue Hawksbill representing one of its most prominent programs. Known as the “Minters of the South Pacific,” the New Zealand Mint issues collectible and bullion coins for small island nations throughout the Pacific, including Niue, Tuvalu, Fiji, and the Cook Islands.

Get Your Clone Troopers at JM Bullion

The Niue Clone Trooper Silver Coin is now available to you for purchase online from JM Bullion. If you have questions for us, we encourage you to call us at 800-276-6508, chat with us live online, or simply send us an email. Don’t forget to check our blog on a weekly basis and follow us on Facebook to find the latest information on upcoming products.