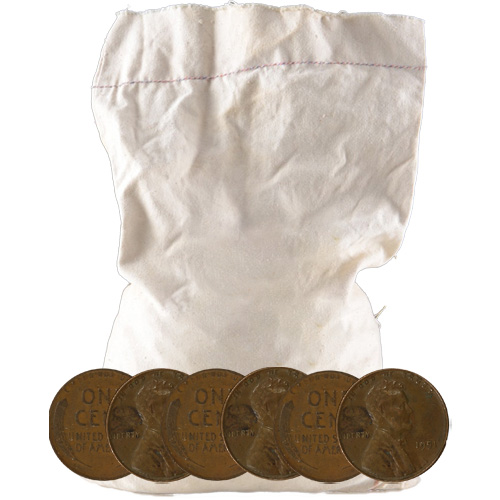 One of the longest-running coin designs in American history is the one-cent coin. President Abraham Lincolns bust appears on the obverse side of all circulation pennies and has since 1909. However, the reverse design of the coins has changed several times in US history, with the so-called Wheat Pennies representing the original Lincoln cent coins. Right now, Wheat Pennies in bags of 5,000 coins are available to purchase online from JM Bullion.

Each of these Wheat Penny bags contains a total of 5,000 coins for a combined face value of $50 (USD). The bag contains Wheat Pennies from common dates of issue, with coins struck in the 1940s and 1950s among the most common remaining today. Wheat Pennies were introduced by the United States Mint in 1909 and discontinued in 1958 as the mint shifted to a new reverse design element.

The obverse design of President Abraham Lincoln in left-profile relief is still featured to this day on the circulation penny, but the Wheat Pennies combined his bust with a different reverse image than is currently used on American pennies. The bust of President Lincoln was created by Victor David Brenner whose initials appeared on the original reverse fields in a prominent striking that actually angered many Americans.

On the obverse of Wheat Pennies, youll find Brenners design of President Lincoln. This bust of Lincoln was the first image of a US President to appear on a widely circulated coin in the nation. Lincolns figure is depicted with engravings of Liberty, In God We Trust, and the date mark. Some of the coins also feature a mint mark on this side.

JM Bullion now carries Wheat Pennies as an excellent option for those looking to invest in copper coins. The coins in this bag contain 95% copper, but there is an exception most commonly found in 1943 pennies. Wheat Pennies struck during World War II often featured a higher zinc content as copper stores were redirected to the war effort.

If you have any questions, please feel free to ask. You can call JM Bullion customer service at 800-276-6508, chat with us live online, or email us directly.