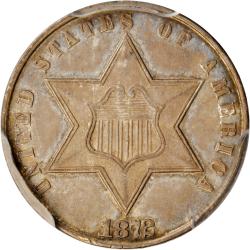 On the obverse side of the coin, the main feature is that of a 6-pointed star. The image sitting within the 6-pointed star is that of the United States Shield. Around the outside of the patriotic central imagery is an inscription reading “United States of America.” Finally, at the bottom of the face and in the center there is an inscription marking the 1872 year of minting.

On the coin’s reverse, the main feature is that of a large, capital letter “C” that is decorated ornately. Within that “C” is the 3-cent face value of the coin. Interestingly enough, the 3-cent face value is inscribed in Roman Numerals, something you rarely see on US coins. Around the outside of all of this are 13 stars, representative of the 13 colonies of the United States.

For collectors, the simple fact of the matter is that there are plenty of counterfeit 1872 Silver Three-Cent Pieces on the market today. Collectors, needing to protect themselves, will only buy the coins they know to be authentic. In other words, collectors will only settle for the coins that have been graded as being authentic. Below, you will find an outline of the different coin grades.

Uncirculated: An Uncirculated 1872 Silver Three-Cent Piece is one of those coins that is in absolutely perfect shape. Though these coins are almost impossible to find, they are of the utmost desirability for collectors.

Extremely Fine: An Extremely Fine Silver Three-Cent Piece might look to be flawless at first glance, but under closer inspection you will notice a few minor flaws. Despite this, the coins are in absolutely stunning condition and are highly sought after by collectors of all types.

Fine: Fine is the grade given to coins that have been circulated for some time, but were taken out of circulation before too much damage could occur. These coins will show a good amount of damage, but are still highly sought after.

Good: Good is the grade given to coins that have been extremely heavily circulated and extremely heavily damaged. Though there are deep scratches, chips and other visible signs of damage, these coins are a desired part of any collection.

As far as the price you are going to pay for an 1872 Silver Three-Cent Piece, this is something that can first and foremost be determined by the condition the coin is in. For this particular coin, however, the condition is not so important. The reason for this is because it was the final edition ever produced. Even in the worst of conditions, these coins will still fetch a very high price. Below, you will find a chart outlining what you can expect to pay for a graded, certified 1872 Silver Three-Cent Piece.