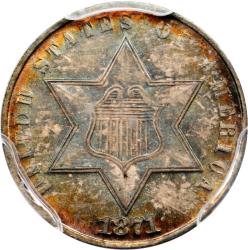 There are a number of different reasons as to why the 1871 Silver Three-Cent Piece is so popular. For one, it is a coin series that was produced only once, and for a short period of time. In addition to this, the 1871 edition is the second to last ever produced. The laundry list of reasons why people love this coin goes on and on, but the simple fact of the matter is that it is highly collectible. Being that there are only a few of these coins still available for purchase, there has never been a better time for you to get your hands on one.

On the coin’s reverse, the design is weird and interesting all at the same time. In the very center you will find the coin-s 3-cent face value, indicated by Roman Numerals. The face value is sitting within the center of a large, capital “C” that dominates the reverse. The capital letter is decorated in interesting fashion as well. Finally, the outer edge of the reverse features 13 stars, each one representative of one of the 13 original colonies of the United States.

For collectors, the fact that the 1871 Silver Three-Cent Piece is so popular means that there are inevitably going to be counterfeits flooding the market. That is exactly the case, and is also the reason why collectors are especially wary before making a purchase of one of these pieces. As such, collectors nowadays will only purchase those coins that have been graded and certified as being authentic.

Uncirculated: Uncirculated 1871 Silver Three-Cent Pieces are almost impossible to find, but are coins that have never made it out onto the open market. These pieces are in absolutely perfect condition and will look today exactly as they did back in 1871.

Extremely Fine: The Extremely Fine grade is given to coins that have been kept in safekeeping throughout the whole of their existence, however they are not free from flaw. The flaws on these coins will be insignificant and quite small, but they are still there and taken into account during grading.

Fine: Fine is the grade given to coins that have been circulated to some extent, but did not accrue a large amount of damage. You will notice smoothing and scratching on the surfaces of these coins, but they will still be in decent shape overall.

Good: Good 1871 Silver Three-Cent Pieces are the coins that have been both heavily circulated and damaged. These pieces will show innumerable signs of their circulation, but are still highly sought after in the eyes of collectors.

As far as the price you might be asked to pay for one of these coins, the first thing you need to take into consideration is the condition of the coin. If the coin has been well-preserved, it will fetch a higher asking price than those coins that have been heavily damaged. In addition to this, the fact that this was the second to last edition of the Silver Three-Cent Piece ever produced inherently drives up the price. Below, you will find a chart aimed at giving you a better idea of what you might be asked to pay for a graded, certified Silver Three-Cent Piece.