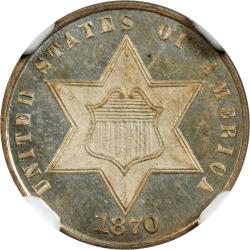 The 1870 Silver Three-Cent Piece is a coin that any collector would like to get their hands on. These coins are so rare, and the reason that is the case is due to the limited number of years during which they were produced. With limited quantities being produced over only a short period of time, it only follows that there are a limited number of Silver Three-Cent Pieces on the market today. As such, there has never been a better time for you to get your hands on one.

On the coin’s obverse, the main feature is that of a large, 6-pointed star that takes up a large portion of the face. Inscribed within the center of the star is the image of the United States Shield as it existed at the time. Around the outside of the central imagery there is an inscription which reads “United States of America.” Finally, the 1870 year of minting is inscribed at the bottom of the face.

On the coin’s reverse, the design is interesting in just about every way. The main feature is that of a large, capital “C” that is decorated in the most unique of ways. Within the center of the “C” there is an inscription marking the 3-cent face value. What is interesting about the face value inscription is that it is in Roman Numerals. Around the outside of the central imagery there are 13 individual stars, each one representative of one of the 13 original colonies of the United States.

For collectors, the unfortunate reality of the modern day is that there are counterfeits of just about any and every popular coin. The Silver Three-Cent Piece, being as popular as it is, is no exception to this. As a result, collectors are wary before ever making a purchase of one of these coins. Collectors nowadays will only purchase the coins that have been graded and certified as being authentic.

Uncirculated: If an 1870 Silver Three-Cent Piece is determined to be of Uncirculated grade, this means that the coin has been kept in safekeeping from the day it was minted. Having never been exchanged, these coins will exist with just about 0 flaws whatsoever.

Extremely Fine: If a coin is determined to be of Extremely Fine grade, this means that the coin will have a few minor flaws, but will otherwise be in great condition. Though you might not even be able to see some the flaws with the naked eye, they are still taken into consideration.

Fine: Fine is the grade given to Silver Three-Cent Pieces that have been circulated quite a bit, but are not overly damaged. They will show typical signs of circulation such as some scratching and chipping, nbut will be, for the most part, in really good shape.

Good: Good is the grade given to a large majority of 1870 Silver Three-Cent Pieces. Even though this grade is indicative of a piece that has been circulated and damaged quite a bit, they are still highly sought after by collectors of all types.