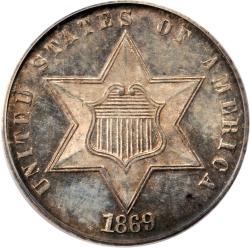 The 1869 Silver Three-Cent Piece is an interesting coin for a number of different reasons. First and foremost, the three-cent face value is something that only existed for a short period of time. This being the case, there are only a limited number available. The overall rarity is something that gets collectors out of their seats. Being that the quantity of 1869 Silver Three-Cent Pieces is only ever going to decrease, there has never been a better time to get your hands on one.

On the reverse side of the Silver Three-Cent piece is an interesting design. The centermost item is an inscription of the 3-cent face value, only the face value is indicated in Roman Numerals rather than standard numerals. The coin’s face value exists within the center of a large, capital letter “C” that is decorated regally. On the outside of the reverse there are 13 individual stars, each one representative of one of the 13 original colonies of the United States.

For collectors, there must be some caution exercised whenever they are dealing with unique, rare coins like the 1869 Silver Three-Cent Piece. Because of the massive popularity of these coins, unscrupulous individuals and organizations produce counterfeits. As a means of protecting themselves from this, collectors nowadays will only deal with graded, certified coins. Below, we have outlined the different coin grades as well as what they mean.

Uncirculated: An Uncirculated 1869 Silver Three-Cent Piece is a coin that never made it out onto the open market. From the day it was minted up until the present day, these pieces have been maintained in safekeeping. As such, they are in flawless condition.

Extremely Fine: A coin determined to be of Extremely Fine grade is one that will look to be in perfect condition at first, but upon closer inspection will show a few minor flaws. A small scratch or chip will be present, but these coins are still in really great shape.

Fine: Fine is the grade given to coins that have been circulated to some extent, but have not been too heavily damaged. These pieces are complete with consistent scratching and some smoothing, but they are still in somewhat good condition.

Good: Good is the grade given to coins that have been heavily circulated as well as damaged. These pieces will have a lot of scratching, chipping, and smoothing. Despite their condition, they are still highly sought after by collectors.

As far as the price you might be asked to pay for a graded 1869 Silver Three-Cent Piece, this is something that can mostly easily be determined by the condition of the coin. If the coin has been very well-preserved, it is almost always going to have a higher asking price than a damaged coin. What’s more, because the 1869 Silver Three-Cent Piece was one of the last editions of the coin, there is extra value added.