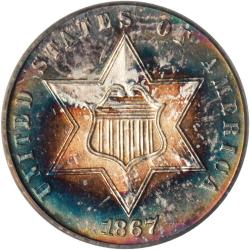 The 1867 Silver Three-Cent Piece may be a coin you have never heard of, but is one you will probably want in your collection. This somewhat obscure coin was produced by the US Mint for a short period of time back in the late 19th century. Though now out of production for more than 100 years, the coin has retained a high level of popularity and desirability thanks to collectors the world over.

On the obverse side of the 1867 Silver Three-Cent Piece, the central feature is a large 6-pointed star that is raised from the face of the coin. Inscribed within the center of the star is the US Shield, as it existed in 1867. Around the very outer edges of the coin there is a raised inscription reading “United States of America.” Towards the bottom of the obverse, the 1867 year of minting is inscribed.

On the coin’s reverse, the central feature is the 3-cent face value of the coin. The central face value is unique for 2 reasons. For one, it is inscribed using Roman Numerals; something rarely ever seen on US coinage. Secondly, the 3-cent face value exists within the mouth of a large, capital letter “C” that is decorated in ornate fashion. Finally, there are 13 stars around the outside of the reverse, each one representing 1 of the 13 original colonies of the United States.

When it comes to collectors today, there can never be too much caution exercised. The reason for this is due to the rising incidence of fake, counterfeit coins. Being that the 1867 Silver Three-Cent Piece is a highly sought after coin, it is also subject to counterfeiting. As such, collectors will only purchase the coins that have been graded and certified as authentic. Below, we explain what each of the different grades mean in laymen’s’ terms.

Uncirculated: If an 1867 Silver Three-Cent Piece is graded as being Uncirculated, this means that the coin never made it onto the open market and never had a chance to be damaged. As a result of it being kept in safekeeping since it was minted, an Uncirculated coin will appear to be flawless.

Extremely Fine: Extremely Fine is a grade that means the coin is in near perfect condition, but does have a few minor flaws. Though these flaws are often times difficult to decipher with the naked eye, they are there, and they are taken into account during grading.

Fine: Fine is the grade given to coins that have been circulated for some time and feature some signs of damage. The damage is typically only limited to light scratching and some minor chipping, as these coins are still highly desirable for collectors.

Good: Good is the worst grade a coin can receive and usually indicates that the piece in question was heavily circulated and damaged. Though the exact type of damage can vary dramatically from coin to coin, it is usually quite significant in nature.

If you are attempting to figure out just how much you might be asked to pay for an 1867 Silver Three-Cent Piece, the first thing you should do is assess the condition of the coin. As you might expect, the coins that have been well-preserved will fetch the highest prices. In addition to this, the fact that the coins are slowly but surely being taken off the market means that the price of a Silver Three-Cent Piece is likely to continue rising.