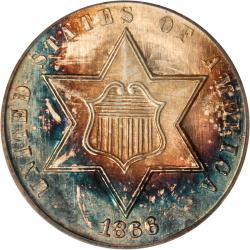 The 1866 Silver-Three Cent Piece is a coin that has enamored collectors from all over the world for decades. Not only is it one of the most unique coins ever produced by the US Mint, it spent only a short period of time in circulation. These two combined facts make the Silver Three-Cent Piece one of the most sought after coins on the market today. Having said all this, there has never been a better time to purchase an 1866 Silver Three-Cent Piece, as the total number available is constantly decreasing.

On the coin’s obverse, the central feature is that of a large 6-pointed star. Inscribed within the center of the star is the US Shield, as it existed back in 1866. Around the outside of the obverse side of the coin, there is an inscription which reads “United States of America.” Finally, the 1866 year of minting is inscribed on the bottom of the obverse.

The reverse of the 1866 Silver Three-Cent Piece is interestingly designed, for a number of reasons. For one, the three-cent face value that exists in the center of the reverse is inscribed with Roman Numerals. What’s more, the face value exists within the mouth of a large, capital letter “C,” which is decorated uniquely. Around the outside of the central inscriptions are 13 stars, each one representative of one of the 13 original colonies of the United States.

The sheer popularity of the 1866 Silver Three-Cent Piece means that, in today’s market, there are bound to be counterfeits. Understanding this to be a fact, collectors take precautions before purchasing coins as old and as rare as the Silver Three-Cent Piece. As such, this is why you will find that collectors will only settle for coins that have been both graded and certified as authentic. Below, we have outlined the different coin grades.

Extremely Fine: An Extremely Fine 1866 Silver Three-Cent Piece is a coin that may look to be entirely free from flaw. Under closer inspection, particularly during the grading process, there will be a few minor flaws uncovered. These coins are still in excellent shape.

Fine: Fine is the grade given to coins that have been circulated for some period of time. Though you will notice plenty of light scratching and other signs of wear, the coin will still largely be in great condition, with most of the imagery and lettering preserved.

Good: Good is the worst grade a coin can receive, and is usually used to describe the most damaged and worn coins. Though these pieces will be in extremely worn shape, they are still popular amongst collectors; a testament to how truly rare and sought after they are.