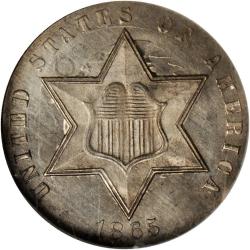 The 1865 Silver Three-Cent Piece happens to be one of those coins that any collector would absolutely die to get their hands on. The story behind this coin is interesting, and making it even more interesting for collectors is the fact that so few were ever minted. As an extension of that, the quantity of Silver Three-Cent Pieces on the market today is diminishing all the time. There has never been a better time to get your hands on one of these beautiful coins.

On the obverse side of the 1865 Silver Three-Cent Pieces, the main feature is that of a 6-pointed star. The star itself is large relative to the size of the obverse face, and large enough that within the center the US Shield is depicted. Around the very outer edges of this coin you will notice an inscription reading “United States of America.” Finally, the 1865 year of minting is listed towards the bottom part of the obverse.

On the reverse side of the coin, the main feature is interesting and wholly unique. What first sticks out at you is the central design of a large letter “C” that is decorated in regal fashion. Within the mouth of the “C” there is an inscription marking the 3-cent face value, however it is in Roman Numerals. Around the outside of all this central imagery there are 13 stars, each one representing one of the 13 original colonies.

In terms of a coin like the 1865 Silver Three-Cent Piece, you have to consider the indisputable fact that a coin as popular as this one is going to be counterfeited. While there are plenty of counterfeits out there, savvy collectors know that you need to purchase only the Silver Three-Cent Pieces that have been graded and certified as being authentic. Below, you will find an outline of the different coin grades as well as what they mean.

Uncirculated: If an 1865 Silver Three-Cent Piece is determined to be of Uncirculated grade, this means that the coin was never circulated on the open market. As a result of this, the condition the coin is in can best be described as flawless.

Extremely Fine: An 1865 Silver Three-Cent Piece on the receiving end of an Extremely Fine grade is one that will look to be in absolutely pristine condition. Under closer inspection, however, some small flaws will be noticed. Still, these pieces are in great shape.

Fine: If a coin is graded as Fine, this means that the coin was probably circulated for a period of time, but before too much damage could occur was taken out. These coins will show signs of wear such as smoothing of the surface imagery and scratching, but will still be in decent shape.

Good: Of all the grades, Good is the worst a coin can receive. The Good grade is usually indicative of coins that have been heavily circulated and heavily damaged throughout the years. These coins, despite their condition, are still sought after.

If you are trying to figure out how much a graded 1865 Silver Three-Cent Piece might cost you, the first thing you have to think of is the condition of the coin. Because collectors only want to add the most well-preserved coins to their collection, it only follows that the most well-preserved coins are also the most expensive. Generally speaking, the Silver Three-Cent Piece is a rare coin and the number of them remaining is decreasing all the time. This too will play into the asking price for these coins. Below, you will find a chart aimed at giving you a better idea of what you might be asked to pay for a graded 1865 Silver Three-Cent Piece.